Objective: Pectus excavatum (PE) is characterized by the posterior displacement of inferior sternum and adjacent cartilages and is the most common congenital chest wall deformity. We aimed to investigate right and left ventricular functions and its correlation with pectus severity index in children.

Conclusion: Despite the fact that most children had only a mild or moderate form of PE, the RV and LV functions were affected.

Pectus excavatum (PE), or funnel chest, is one of the most common congenital skeletal deformities. Characterized by an inward depression of the sternum, it is seen in approximately 1 in every 400 male births.[1] Pectus anomalies can be diagnosed at an early age and are three times more common in boys.[2]

The etiology of PE is unknown; it is often seen as isolated anomalies. The primary deformity is dystrophic costal cartilage growth along with the sternum depression. Pectus deformity manifests as subtle abnormalities associated with collagen morphology of children’s costal cartilages, but the causal significance of this is not precisely known. Approximately one-third of cases have a positive family history of chest wall deformity.[3]

In addition to cosmetic problems, posterior angu-lation of the sternum and rib cartilages may cause changes in the rotation and location of the heart and may lead to cardiorespiratory function abnormalities.[4] Some studies demonstrated a significant compromise of cardiac or pulmonary functions[5, 6], whereas other studies showed no change in cardiac functions.[7] Decreased cardiac output, mitral valve prolapse (MVP), and dysrhythmias are considered the primary cardiac effects of PE. Compression of the heart, in particular of the right atrium and ventricle by the chest wall, results in incomplete filling and decreased stroke volume, and eventually in decreased cardiac output.[5, 6] Similarly, compression of the right ventricle (RV) by the chest wall can lead to patient symptoms including dyspnea and chest pain with exertion.[8,9] The chest deformity may also cause compression on the vena cava inferior.[10]

There are conflicting studies about the effects of PE on cardiopulmonary functions. Malek et al.[11] demonstrated that the oxygen pulse and maximum oxygen uptake were low in PE patients. Yalamanchili et al.[12] showed in a case with PE that SV-Rt (RV stroke volume) was reduced. Haller et al.[13] reported that cardiopulmonary functions improved after surgery. Conversely, it is reported that since these patients do not participate in social events and sports, the cardiopulmonary symptoms are related to psychological disorders.[14, 15]

We aimed to investigate right and left ventricular (LV) functions more comprehensively and determine their correlation with pectus severity index in children with PE.

We studied 32 pediatric patients selected randomly from those with PE but without any other congenital anomaly or disease and 40 healthy subjects. Individuals with pulmonary, renal diseases and a history of diabetes, hypertension, obesity or other systemic diseases were excluded. A full history was taken and a complete physical examination was performed by the same physician. The body height and weight of all children were recorded. Body surface area (BSA) was calculated by Mosteller formula.[16]

At the time of the other tests, an electrocardiogram was recorded for all patients. Transthoracic echocardiography was performed by a single experienced pediatric cardiologist and the following parameters were monitored:

SV was calculated as: SV = (LVOT / 2)2 × VTIAo × 3.141. The LV outflow tract (LVOT) diameter was measured at the base of the aortic leaflet at the parasternal long axis view in echocardiography. Time velocity integral for aortic valve (VTIAo) was obtained with continual wave Doppler immediately below the aortic valve in the apical long axis view.

Mitral and tricuspid early (E) and late (A) filling velocities were recorded from the apical four-chamber view with the pulse-wave Doppler during diastole. E, A, and deceleration time (DT) were used as both ventricular diastolic function parameters. Ejection time (ET) was calculated from the beginning to the end of the pulmonary and aortic flow.

Isovolumetric myocardial acceleration (IVMA) was calculated by dividing isovolumetric volume (IVV) by the time interval from onset of IVV to the time at peak velocity of this wave.

Haller Index (HI) = A / B where A stands for transverse diameter at the deepest level of deformity, and B for anterior-posterior diameter of the same level. An HI <2.5 was considered as mild, HI = 2.5-3.2 as moderate, and HI>3.2 as severe deformity. The A and B diameters of our PE subjects were calculated by thorax computed tomography.

The statistical analyses were performed using Statistical Package for the Social Sciences (SPSS). Data were analyzed by independent t test and Analysis of covariance (ANCOVA) test. The arithmetic means of cardiac measurements of children with pectus deformity and of the control group were compared according to independent t test. Important parameters between groups as determined by independent t test were subjected to ANCOVA multiple analyses. Cardiac parameters can be affected by age and the BSA, so these two factors are taken as covariate variables to multi ANCOVA analysis. In ANCOVA analysis, pectus and control group were taken as fixed factors; age and BSA were taken as covariate variables. HI arithmetic average and correlation values of HI and the cardiac parameters were investigated.

32 children (23 male, 9 female) with PE deformity and 40 (17 male, 23 female) healthy controls were included in the study. There was no significant difference regarding average of the age and body surface area (BSA) between the groups. 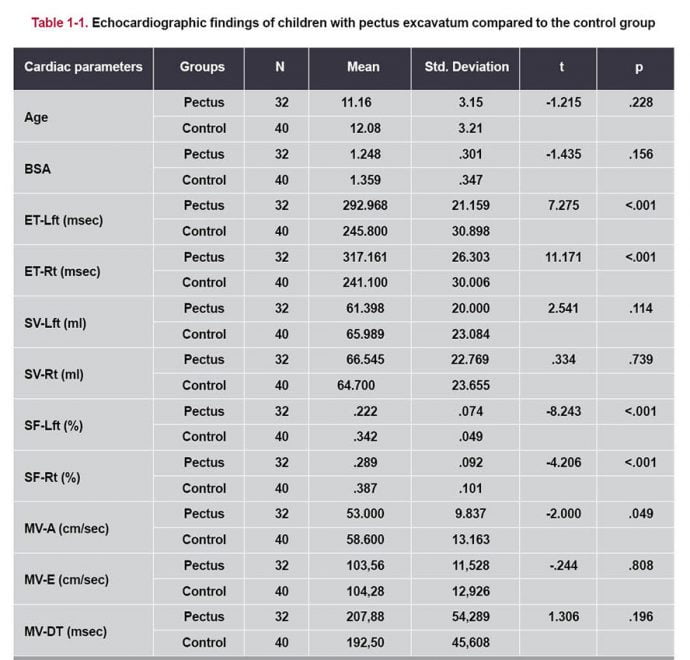 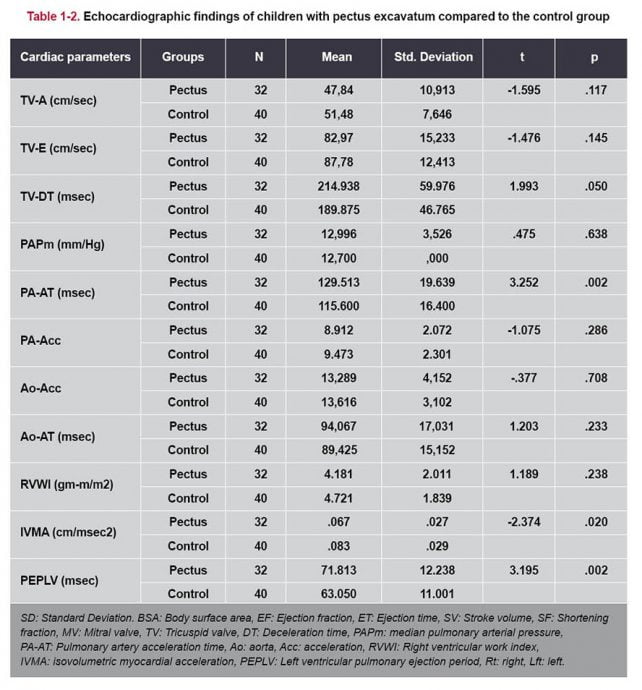 ANCOVA analysis revealed that, when age and BSA were taken as covariate variables and pectus and control group as fixed factors, all parameters mentioned above were found to be statistically significant (Table 2).

The arithmetic average of the SF-Lft, SF-Rt, MV-A and IVMA were found to be lower in children with PE than in controls (Table 1). According to ANCOVA analysis, when age and BSA were taken as covariate variables and pectus and control group as fixed factors, all parameters except for MV-A were found to be statistically significant. These differences in SF-Lft of 48.5%, in SF-Rt of 19.4%, in IVMA of 8.2%, and in EF-Rt of 7.2% can be attributed to pectus disease (Table 2). 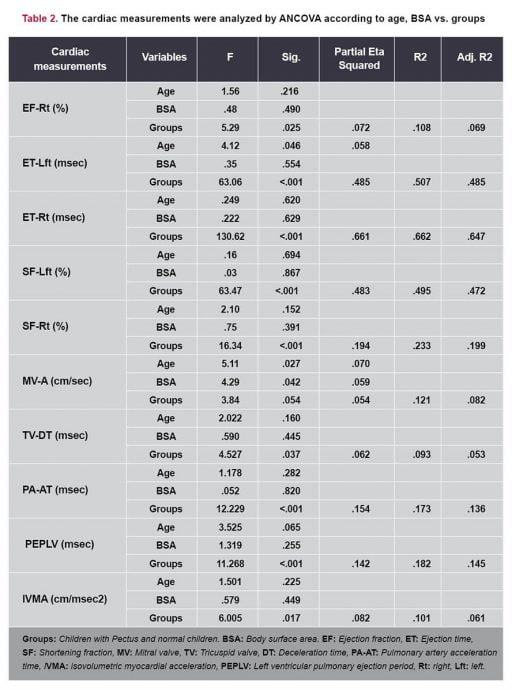 Although PE can be viewed as a slight problem, it can lead to much more than a cosmetic deformity. Volume reduction and cardiac chest compression can lead to a reduction in cardiopulmonary function and physical capacity. Symptoms rarely appear in early childhood but increase with age.[17] The chest wall elasticity decreases, stiffness increases, heart deviation to the left decreases, and pressure on the heart increases, with corresponding increase of symptoms with age in PE patients.

RV dysfunction can be seen in patients with PE. Ventricles share a common septum and are within the same pericardial cavity. This relationship between the ventricles also causes similar changes in both systolic and diastolic functions.[18] The compression on the RV also can cause changes in the size and function of the LV. Cardiac output and SV were demonstrated to be reduced in pectus patients and improved after corrective surgery.[19] Gürsu et al.[20] found lower EF-Lft in the PE group and also revealed that there was an inverse relationship between EF-Lft and SF by HI. EF-Lft and SF-Lft were significantly reduced by increasing HI, but LV end-diastolic volume showed no significant change. Another study[21] demonstrated, using transesophageal echocardiography, that RV end-diastolic size and EF-Lft were increased after the surgery. Bawazir et al.[22] showed that after the pectus corrective surgery, the LV cardiac output and index improved and was maintained thereafter. In their meta-analysis, Malek et al.[23] indicated that the LV function was increased after surgery.

They did not detect any significant correlation between the EF-Rt and EF-Lft and pectus index. They also did not find any differences in EF-Lft, SF-Lft, aorto-pulmonary circulation time, or pulmonary flow indices between PE patients and controls. They suggested that the high end-systolic volume caused reduced EF-Rt. To assess ventricular global functions, EF is the commonly used measurement. Reduced EF generally reflects decreased contractility. Because EF depends on loading conditions, and changes in preload and afterload affect the contractility, EF is not considered an accurate measurement[27,28] Similarly, regional EF is also load-dependent and does not reveal contractility.[29] IVMA is a measurement of ventricular contractile function that is unaffected by preload and afterload changes in a physiological range. Vogel et al.[30] showed in a pig model that IVMA was less load-dependent than EF.

They demonstrated that IVMA was unchanged with the decrease in the preload and increase in the afterload conditions and therefore can be used to assess RV myocardial function. In the current study, EF-Rt was found to be significantly lower in pectus children than in controls, although EF values were within normal limits and EF-Lft was similar between the two groups. At the same time, IVMA was found to be lower in patients with pectus than in controls, showing that RV contractility is reduced in pectus children. RV functions using quantitative echocardiographic parameters were assessed by Gurkan et al.[31] They reported that the preoperative tricuspid annular plane systolic excursion, SV, and IVMA values were significantly improved in the postoperative period.

We showed that SF-Rt and SF-Lft were lower in pectus children than in controls. A decrease in the SF usually precedes a noticeable decrease in the EF and, similar to EF, is related to ventricular function. Besides RV functions, LV contractility was also affected. E, A, and DT were used for both ventricular diastolic function parameters. Tricuspid valve DT that was found to be prolonged in patients with PE and PAPm was similar in both groups.

We found that PE can lead to major cardiac problems, not limited only to the RV just below the defect; the LV systolic function also can be affected. We failed to demonstrate a relationship between the severity of PE and cardiac function. This possibly was due to the limited number of severe cases in our PE group. Clinicians should pay more attention even in mild PE cases due to the markedly affected cardiac functions in these individuals.

Study limitations: In the current study most of the children had a mild and moderate form of the PE. Further studies with larger sample size and a greater number of children with a severe form of PE are warranted to better elucidate the cardiac functions in patients with PE.