Generally cervical paragangliomas grow slowly, but if they left untreated, they grow rapidly due to rich vascular supply and expand encircling the vascular structure and cranial nerves. Surgery is the only curative treatment in this cases however surgical management of carotid body tumor has a high rate neurovascular morbidity because of a close comminication with neurovascular formations. For the surgical planing and prognostic purposes, Shamblin classification was described for these tumors’ size and invasion degree in 1971.(6) We report here a very rare case of glomus tumor treated successfully with surgery.

48 years-old male patient refered to us with the complain of bilateral painless huge neck masses. He had also obstructive sleep apne and hypopne syndrom leading to significant cyanosis for 2 years which was concurrent with neck masses. The masses diameters were 10,5x8cm on the left (Picture 1) side and 3x3cm on the right side. 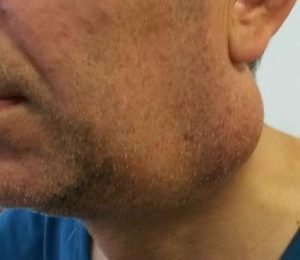 Radiologic examination with USG, two and three dimential CT (Picture 2-3) and MRI demonstrated glomus tumor in which were class 3 in Shamblin Classification. There was no hormonal activity or neurologic deficit about mass compression. 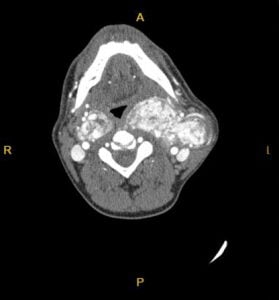 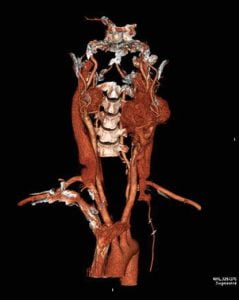 Three days after the embolization procedure he was operated on his left side. A huge tumoral mass which was thightly encircling the releated vessels was excised from all around the internal and external carotid arteries also like hypoglossus, vagus and laryngeus recurrens. There was no residuel mass. Histology confirmed the diagnosis of glomus tumor.

Surgery was uncomplicated. He was moved to service bad on the next day and discharged 10 days after the surgery. A mild apathy and aphasia were occured on second day of the surgery.he was cosultated to the neurology department. With corthicosteroid theraphy, the symptoms were regressed on 4. day and disapperared on 8. day. He was checked on the first month of the surgery. There were no permanent operative cranial nerve injuries and other problems about surgery. His right side surgery will be applied in a few months.

Carotid body tumors are very rare neoplasms and rarely seen in neck resion. In this cases, generally, clinical follow-up is advised untill the compression or hormonal activation signs due to mass were occured. Reported nerve injury rates range from 11% to 50% (7,8, 9,10) and has high risks with higher Shamblin class.(1) Neuronal injuries (transient or permanent) of the vagus nerve, hypoglossal nevre and other communicated nerves and vascular injuries of the carotid artery and it’s branches and surrounding veins have been associated with surgical procedure(8), especially in larger tumors with close proximity to critical structures requiring a more complex procedure for removal.

Surgery is the only curative therapy and accepted as a gold standart despite high risks for neurovascular complications.