Introduction: Recently, many hematologic markers have identified as prognostic and diagnostic indicators in different acute coronary syndrome (ACS) patients. In particular, neutrophil / lymphocyte ratio (NLR) and platelet / lymphocyte ratio (PLR) are recognized as markers in the diagnosis and prognosis of ACS. In this study, our aim was to investigate the correlation between the diagnostic yield of PLR and NLR values and other markers such as troponin in all ACS patients.

Material and methods: 319 patients admitted to our hospital with ACS and 283 control patients were included in the study. Leukocyte, neutrophil, platelet, lymphocyte counts, PLR, NLR and high sensitive troponin I (HsTnI) measurements were taken.

Conclusion: Hematologic markers were found to be significantly higher in the ACS group than the controls. The difference also continued in subgroup analyzes. NLR and PLR correlated with many other ACS indicators.

Coronary artery disease (CAD) is a major cause of morbidity and mortality worldwide.(1) One of the most important causes of CAD is atherosclerosis and atherosclerosis is considered to be an inflammatory disease.(2) Previous studies have shown serious evidence that atherosclerosis is systemic rather than focal disease.(2) Recently, many studies have been published, which demonstrate that hematological markers measured in peripheral blood count such as platelet, neutrophil, lymphocyte are predictors in the diagnosis and the determination of the prognosis of acute coronary syndromes (ACS).(3,4) Increased platelet activation has been reported to play a role in the onset and the progression of atherosclerosis.(5) It has been reported that increased platelet count is associated with platelet activation and may be associated with thrombotic tendency and major adverse cardiac events.(3,5)

On the other hand, there are reports that low lymphocyte counts are associated with lymphocyte apoptosis in prolonged inflammation, decreased immune-reactivity, and may also cause major adverse cardiac events.(5-7) As a result, proliferation and relative thrombocytosis are seen in the megakaryocytic series with inflammation.(7) Thus, in some studies, high platelet / lymphocyte ratio (PLR) and neutrophil / lymphocyte ratio (NLR) are predicted to better reflect inflammation and pro-thrombotic states and may be predictors of prognosis in acute ACS patients.(7,8) In our study, we aimed to investigate the diagnostic efficiency of PLR and NLR values and their correlation with other predictors such as high sensitivity troponin I in ACS patients admitted to our hospital.

This single-center comparative study was conducted in a tertiary heart center. The study was approved by the local Ethics committee and informed consent of the patients and controls were obtained. 319 patients admitted to our hospital with the diagnosis ACS between 2015 and 2017 were included in the study. In the same time period, 283 healthy individuals who applied to our outpatient clinics were included in the study as a control group. Subsequently, the ACS group was divided into subgroups as unstable angina pectoris (USAP), non-ST elevation myocardial infarction (NSTEMI), and ST elevation myocardial infarction (STEMI). Patients with severe valve disease, decompensated heart failure, malignancy, hematological disease, systemic inflammatory disease, active infection, autoimmune disease, severe renal or hepatic insufficiency and those using steroids were excluded from the study.

The demographic and biochemical parameters of the patients and controls were obtained from the files. NLR and PLR were calculated from the neutrophil, platelet and lymphocyte counts obtained from the hemogram. PLR and NLR were calculated by dividing platelet count by lymphocyte count, respectively, by dividing the number of neutrophils by the number of lymphocytes. For the measurement of high sensitive troponin I (HsTnI) EDTA whole blood sample was used, HsTnI was measured by the method of the AQT90 FLEX cardiac Troponin I immunoassay (Radiometer Medical ApS, Copenhagen, Denmark), and the method is a one-step sandwich immunofluorometric assay based on the use of three monoclonal antibodies, two for the capture and one for the detection.(9)

In the ACS subgroup analysis, NLR and PLR values were significantly higher in STEMI patients than in USAP and NSTEMI patients (p <0.001) (Table 2). 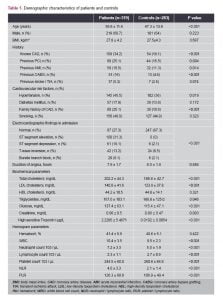 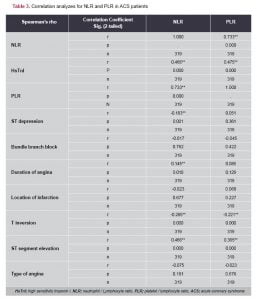 In recent years, NLR and PLR have become important markers easily measured from peripheral blood and have proven diagnostic and prognostic information in patients with ACS.(10) In our study, NLR and PLR values were found to be higher in all ACS patients than the control group in accordance with the literature. In subgroup analyzes, NLR and PLR values were significantly higher in STEMI patients than NSTEMI and USAP patients. NLR and PLR were correlated with each other and with other parameters which have proven prognostic information in ACS patients such as high sensitive troponin I (Table 3). Sezer et al. showed that the number of neutrophils and the mean platelet volume in patients with acute myocardial infarction were associated with reperfusion injury after infarct-related artery occlusion opened.(10) In many inflammatory conditions neutrophils are stimulated to release many cytokines and cytotoxic or proteolytic enzymes.(4)

Although the pathophysiological mechanism of this condition is not fully understood, lymphocyte count is thought to reflect the early response of myocardial ischemia to physiological stress and systemic immunodeficiency.(4) Conversely, high lymphocyte counts during ACS reflect a strong immune response and the prognosis of these patients is better.(4) Instead of examining neutrophils and lymphocytes separately, NLR has been shown to be more prognostic.(2) Wang et al. have shown that NLR is predictive of all-cause mortality and cardiovascular events in patients undergoing coronary angiography.(12) Likewise, Tamhane et al. found that NLR value in patients with percutaneous coronary intervention is related to in-hospital and 6-month mortality.(13) Ayca et al. have shown that NLR is associated with stent thrombosis.(14)

NLR has been studied by different investigators in relation to different scoring systems showing CAD severity and it has been shown to be related to NLR by SYNTAX, GRACE and TIMI scores.(15-17) In our study, similarly, the NLR values were higher in the ACS group than in the control group. Correlation analyzes showed that NLR correlated with high sensitive troponin I, PLR, ST elevation, ST depression, T wave negativity and angina duration. NLR was found to have a sensitivity of 63.6% and a specificity of 80.2% for ACS diagnosis. The role of platelets in ACS is versatile.(4) The platelet count is associated with the underlying inflammation because inflammatory mediators stimulate megakaryocytic proliferation and result in a prothrombotic state with relative thrombocytosis.(4,5)

As platelet levels increase, more platelet rich thrombosis is observed in atherosclerotic plaques, and antiplatelet therapy response is reduced.(4) It is known that platelets are associated with endothelial activation as well as inflammatory functions.(2) Active platelets release pro-angiogenic mediators and regulate the microvasculature of blood vessels.(18) As essential components of coronary thrombus formation, platelets play an important role in ACS.(2) In the CADILLAC study, increased platelet counts were also associated with restenosis and stent thrombosis.(19) PLR is thought to better reflect both inflammation and coagulation pathways.(4) In their study using optical coherence tomography, Wang et al showed that high PLR is associated with sensitive plaque properties such as thinner fibrous cap, wider lipid load in non-target vessels in ACS patients.(20)

In their meta-analysis, Li et al. showed that increased PLR is associated with in hospital and long-term mortality and cardiovascular events in ACS patients.(5) Yıldız et al. have also shown that high PLR values are associated with no-reflow development after percutaneous interventions.(23) Prajapati et al. showed a relationship between increased PLR and NLR and decreased HDL values in CAD patients.(18) The combined use of NLR and PLR suggests that more prognostic information will be obtained. In this context, Choi et al. found that combined NLR and PLR elevations were associated with long-term cardiovascular events.(22) Hematological markers have also been shown in other publications as indicators of inflammation. Similar to other studies, in our study, NLR and PLR in patients with ACS were higher than in the control group. The difference of present study from the other studies is that all the ACS subgroups were included and examined in the same study and that the NLR and PLR were high in all the subgroups.

Inflammatory and thrombotic processes play a crucial role in the development of atherosclerosis, atherosclerotic plaque destabilization and clot formation after plaque rupture. In the diagnosis and prognosis of ACS, there are still needs for reliable, easy, inexpensive and fast detectable markers. PLR and NLR are cheap and easy to use markers in the diagnosis and the prognosis of ACS patients but definite cut off values are needed to use these markers. Large scale and comprehensive studies are needed to reveal absolute cut off values for these markers.