Endovascular aortic repairs in hybrid theatres have been implemented as an alternative option for the treatment of aortic arch aneurysms. The improvements in synthetic graft technologies, cardiopulmonary bypass techniques, blood protection, myocardial protection and protection of the central nervous system have resulted in safer applications of surgical interventions, particularly to the arcus aorta. In this article, we present our successful emergency surgical therapeutic approach in a 74-year-old female patient case with a ruptured giant aortic arch aneurysm.

Due to its high mortality and morbidity rates, the surgical treatment for aortic arch aneurysms is challenging,(1) although there is currently a lack of consensus on the optimal treatment modality in the high-risk patients. Recently, endovascular aortic repairs in hybrid theatres have been implemented as an alternative option for the treatment of aortic arch aneurysms.(1) The improvements in synthetic graft technologies, cardiopulmonary bypass techniques, blood protection, myocardial protection and protection of the central nervous system (particularly selective cerebral perfusion and hypothermic circulatory arrest) have resulted in safer applications of surgical interventions, particularly to the arcus aorta.(2-5) In this article, we present our successful emergency surgical therapeutic approach in a female case with a ruptured giant aortic arch aneurysm.

A 74-year-old female patient was admitted to our emergency clinic with complaints of blurred consciousness, chest pain and dyspnea. A physical examination of arterial blood pressure, pulse and oxygen saturation revealed values of 80/40 mmHg, 122 beats/min and 85–90%, respectively. On auscultation of the left hemithorax, breath sounds decreased, and a chest X-ray revealed a giant aortic aneurysm and opacity in the left hemithorax that was suggestive of a pleural effusion (Figure 1A). A true saccular aortic arch aneurysm that was measured 8×6 cm2 which had ruptured into the left hemithorax was detected in a contrasted thoracoabdominal tomography (Figure 2A, 2B). 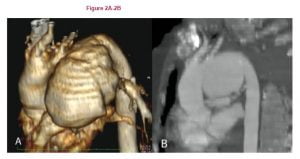 Written informed consent was obtained from the patient’s relatives, and the patient who underwent emergency surgery. The left lung was adhered to the pleura, and the aortic arch was extremely atherosclerotic. A substantial amount of hematoma was present in the left thorax. A cardiopulmonary bypass was performed using the cannulation of the right axillary artery.

The patient was cooled to 25°C and aneurysmal sac opened by applying circulatory arrest under the right selective antegrade cerebral perfusion. An anastomosis of a 30-mm Hemashield graft (Maquet, France) was applied to the descending aorta, and the branches of the arcus were implanted onto the grafts cutting in the form of islets. The graft was then clamped, and a total bypass was applied. The total aortic arch replacement was completed through the graft anastomosis with the ascending aorta during the heating phase. The cardiopulmonary bypass was uneventful. The incisions were closed after bleeding management, and the patient was transferred to the Intensive Care Unit (ICU). She recorded no hemodynamic or neurological problems in her post-operative follow-up, although she was unable to tolerate extubation during the ICU stay (in the postoperative 10th hour), and she was re-intubated due to pulmonary complications.

The patient was then transferred to the Anesthesiology and Reanimation Clinic and was extubated by administering a successful ICU program (Figure 1B). She experienced no problems following extubation, and she was discharged on the 15th postoperative day.

Aortic ruptures, as a complication of aortic aneurysms, leads to massive bleeding with a high rate of mortality. An emergent diagnosis and treatment following a multidisciplinary approach can lead to successful outcomes, despite high mortality rates, as in our case.

With the developments in technological methods and increased surgical experience over the past two decades, successful therapeutic results have been reported in patients with aortic aneurysms.(6) Applications of minimally invasive endovascular methods that can be performed via small inguinal incisions rather than thoracal aortic interventions through major surgical incisions have been rapidly increasing in recent years.(7) Hybrid methods and conventional open surgery have been compared in a study that investigated aortic arch interventions, and higher technical success rates with reduced mortality rates have been reported with the application of hybrid methods in a certain high-risk patient group.(1)

Endovascular treatments can be administered in cases of thoracic aortic disease that require a surgical approach if open surgery is considered to be a particularly high risk and if the anatomical appearance is appropriate. Our case was subjected to an open surgical intervention due to her presentation with hemodynamic instability and poor clinical status on emergency admission. Furthermore, there was no opportunity to make an endovascular intervention at the time of her admission, and an urgent intervention was needed.

In previous studies, it has been suggested that no deﬁnitive evidence exists that supports the superiority of hybrid thoracic endovascular aortic repair (TEVAR) over open arch repair,(10) although most cases of hybrid TEVAR are in high-risk patients who are ineligible for conventional open aortic repair. In this respect, comparing and interpreting the results can be challenging. Further prospective, randomized controlled trials are required to compare the outcomes of both surgical strategies.

In conclusion, although the recent outcomes of open arch repair and hybrid TEVAR demonstrate acceptable results, particularly early after the procedure, open arch repair can bring more reliable outcomes during follow-up. These two surgical strategies, when properly selected based on the individual risk, can improve surgical outcomes in patients with aortic arch aneurysms, especially in ruptured cases.