Ivemark syndrome is a rare anomaly with a reported incidence of 1 in 10000 – 20000 live births. It is characterized by agenesis of spleen, a dextropozed, hypoplastic or lobulated spleen or multiple spleens in association with complex cardiac anomalies.[1,2] These malformations are usually associated with trilobulated or bilobulated lungs and abnormalities of other abdominal organs. Some other anomalies like Howell-Jolly and Heinz bodies in peripheral blood, agenesis of corpus callosum and facial abnormalities were also noted.[3,4]

A 20-year-old woman was admitted to Dr. Sami Ulus Research and training Hospital because of dyspnea and palpitation. Family history was unremarkable. At the time of admission her height was 164 cm and body weight was 49 kg. Physical examination revealed that she had mild cyanosis with facial anomalies including prominent nasal bridge, malformed ears, simple philtrum, narrow forehead, hypotelorism and mild mental retardation (Figure 1). 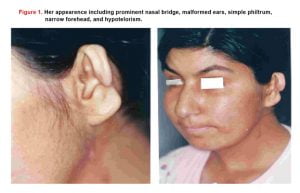 Auscultation revealed augmentation of the S1 sound, and a 20/60 systolic murmur was heard at the left side of the sternum. The heart rate was 72 / min and systolic blood pressure was 90 mm.Hg. The liver was enlarged to 2-3 cm below costal margin. Telecardiogram showed an enlarged heart with a cardiothoracic ratio of 0.6. Transthorasic echocardiography revealed mild pulmonary stenosis with a 45 mm Hg gradient, primum ASD, a membrane in the right atrium and mitral insufficiency (Figure 2). Abdominal ultrasonography indicated polysplenia, accessory gallbladder and dilatation of intrahepatic ducts. Cranial tomography was normal (Figure 3). 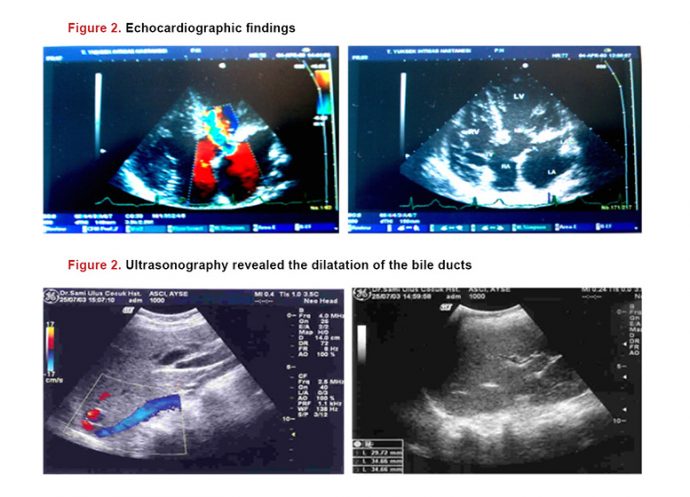 Then right atriotomi was performed. On exploration it was observed that the right atrium was divided into two portions by a membrane. The membrane was fully resected. The mitral cleft was repaired with 5-0 prolene suture and the primum ASD was closed with a pericardial patch. Pulmonary valvular stenosis was treated by commissurotomy. The post-operative course was uneventfull and she was discharged at 6th postoperative day.

Ivemark syndrome is a very rare congenital disorder that includes complex cardiac malformations, splenic agenesis and abnormalities of other abdominal organs. Most of the cases are sporadic, but familial occurence also has been described, suggesting autosomal recessive inheritance. The etiology of the syndrome has not been clearly defined, but the teratogenic effect seems to occur between the 30th – 40th days of intrauterin life. A study by Britz-Cunningham indicated that a mutation of the connexin 43 (CX43) gene might also be responsible for Ivemark syndrome.[4]

Ivemark syndrome is a multiple organ syndrome and symmetric liver, malrotation or dilatation of the bowel, duplication of uterus and vagina were observed.[5,6] In our case, in addition to polysplenia, accessory gallbladder, multiple facial anomalies and mild mental retardation were observed. But Ivemark Syndrome’s lung or hematologic signs were absent.

Ivemark syndrome accounts for 1-3 % of all congenital heart defects. The most frequent cardiac malformations are as follows: Persistent atrioventricular canal, patency of ductus arteriosus, atrial septal defect, ventricular septal defect, truncus arteriosus and dextrocardia.[7] The cardiac anomalies can increase the mortality risk and prognosis depends mainly on the degree of malformation of the heart.[8] Due to our knowledge the association of cor triatriatum with Ivemark syndrome has not been reported previously.