Pericardial effusion is not a rare complication of cardiac surgery and more common in patients undergoing coronary artery by-pass grafting (CABG).(1-3) Patients may present with various symptoms like chest pain, dyspnea, and orthopnea.(4) But presentation with hyponatremia is extremely rare. Here, we described a case with recurrent pericardial effusion after CABG and its first attack presented with reversible hyponatremia.

A 55 year old woman was admitted to emergency department with dyspnea on mild exertion, fatigue, abdominal pain, and vertigo. She has undergone CABG operation, two months ago. Past medical history was including hypertension. Her medications were silazap-ril, acetytsalcilic acid and famotidin.

On physical examination, blood pressure was 100 /60 mm Hg, heart rate was 84 beats/min, respiratory rate was 18 breaths/min. Heart sounds were distant and deep on cardiac auscultation. There was distension on abdominal examination. Mental status was normal. 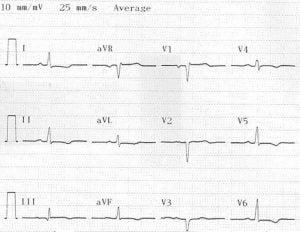 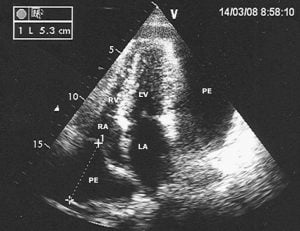 Because of the progressive symptoms and size of the pericardial effusion pericardiocentesis was performed via subxiphoid route and approximately 1500 ml serous pericardial fluid was removed. A pigtail catheter was leaved in pericardial cavity and during the following 24 hours 1700 ml blood-tinged fluid removed, subsequently. Control laboratory studies were; serum sodium, 134 mmol/L; blood urea nitrogen, 36 mg/dl; serum creatinine, 1.1 mg/dl. Surprisingly, serum sodium was normalized after pericardiocentesis without any specific therapy. In control echocardiography only minimal residual pericardial fluid was detected and patient was discharged with colchicine 0.5 mg 2×1 and ibuprofen 800 mg 2×1 therapy.

Following cardiac surgery the incidence of pericardial effusion is high (range, 50 to 85%) and CABG accounts for more than half of the cases.(1-3) Patients may be asymptomatic or present with various symptoms including chest pain, dyspnea, orthopnea, cough, fatigue and palpitations.(4)

Presentation of a pericardial effusion with hyponatremia is extremely rare. In previous reports, inappropriate secretion of antidiuretic hormone as a response to diminished cardiac output in pericardial tamponade was accepted as most plausible mechanism for hyponatremia.(5-7) This response is mediated by baroreceptors in the carotid sinus, which sense a reduction in pressure or stretch, and can overcome the inhibitory effect of hyponatremia on ADH secretion.(8)

Reversibility of hyponatremia and rapid correction after pericardiocentesis without any specific treatment for low serum sodium levels support this hypothesis. After removing the large, diffuse pericardial effusion leading low cardiac output, the cause for secretion of antidiuretic hormone disappeared and serum sodium levels normalized by loosing extra volume.