40 years old male with no known chronic heart disease was admitted to the emergency department because of palpitations. The patient had used cold medicine containing paracetamol and pseudoephedrine within the same day. Electrocardiogram (ECG) revealed wide QRS-complex tachycardia (206/bpm). Although the patient was hemodynamically stable, the tachycardia primarily was considered as VT. First, 300 mg amiodarone was administered intravenously but the tachycardia sustained. Repeated biphasic electrical cardioversion (CV) with 100-200 joules was performed due to resistant and sustained tachycardia, but failed. CV was repeated after intravenous administration of 5mg lidokain but again failed. Then 3 g of magnesium sulfate (150 mg/min) and 5mg metoprolol was administered intravenously. The tachycardia rate decreased (116/bpm) but still sustained (Figure 1). 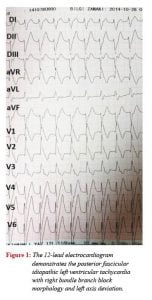 Finally sinus rhythm was restored spontaneously (Figure 2). Detailed evaluation of 12-lead ECG demonstrated the wide QRS-complex tachycardia with right bundle branch block morphology and left axis deviation and was found to be P-IFLVT. The patient was assessed by echocardiography and coronary angiography electively. There was no structural heart disease. Electrophysiological study was recommended and was performed. A left ventricular posterior fascicular ventricular tachycardia (tachycardia cycle length of 390 ms) was induced by the programmed stimulation (500/350/200 ms). Radiofrequency ablation was done successfully with retrograde approach. The patient was discharged with 100 mg acetylsalicylic acid for 1 month.

Antidromic atrioventricular tachycardia, supraventricular tachycardia with aberrant conduction and VT were considered in the differential diagnosis of the tachycardia due to stable clinical condition of the patient, no known structural heart disease and the patient’s age.[1] There were no concordance, dissociation, fusion and capture beats, but the absence of these did not exclude the diagnosis of VT. Right bundle branch block QRS duration> 140 ms, R / S ratio in V6 <1, the presence of R wave in aVR were evaluated as findings in favor of the VT.[1] Finally the diagnosis of P-IFLVT was confirmed by the right bundle branch block with left axis deviation.

To the best of knowledge it’s the first reported pseudoephedrine induced P-IFLVT. The differential diagnosis of wide QRS-complex tachycardia is crucial for prompt, accurate and efficient approach.