Arteriovenous fistulae are created for haemodialysis in patients with end-stage renal failure. Due to repeated punctures and concomitant heparinization an iatrogenic pseudoaneurysm is not a rare complication of patients having AVF. A case of a 58-year old patient having a pseudoaneurysm related to his sidetoside brachiobasilic AVF at the left antecubital region is reported in this article.

Arteriovenous fistulae (AVF) are created for haemodialysis in patients with end-stage renal failure. One of the complications of AVFs is iatrogenic pseudoaneurysms related to repeated punctures and concomitant heparinization. The incidence of pseudoaneurysms complicating AVF ranges from 2% to 10%.[1] A 58-year old diabetic, hypertensive patient who had a sidetoside brachiobasilic AVF at the left antecubital region was referred to our clinic with a 4 months history of pulsatile swelling in his left arm (Figure 1). 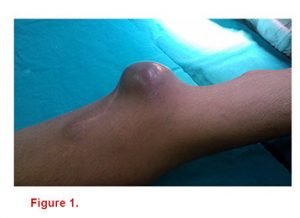 He had been on hemodialysis for 4 years. Color Doppler Ultrasonography revealed a dysfunctioning fistula created between right brachial artery and basilic vein and a 62 x 55 mm pseudoaneurysm of the left basilic vein. Moreover, venous thrombosis in the proximal portion of the left basilic vein was observed by color Doppler Ultrasonography. The patient underwent surgical repair. Pseudoaneurysm and the AVF was resected, and the defect on the arterial wall was primarily repaired(Figure 2, 3). Postoperative recovery was uneventful.