Type A aortic dissection is a highly life-threatening disease often ending in mortality due to aortic rupture and organ malperfusion. Surgical intervention is the only recommended treatment modality in such cases though it still bears unresolved problems causing mortality and morbidity. Although there is an expanded list of considerable surgical obstacles, aortic root repair remains a challenging problem among these surgical difficulties especially when the aortic dissection extends to the sinuse of valsalva. Furthermore, suturing for the anastomosis of the affected and weakened aortic root due to dissection will cause further damage that might result in uncontrollable surgical bleeding. To solve these problems, numerous valuable surgical techniques were introduced including reinforcement with one or two strips of Teflon felt, glue fixation, supporting partial and entire aortic root with graft, and modifications of the latter.1-7

There are, however, some advantages and disadvantages in each of these options. In the traditional felt sandwich technique, the dissected aortic layers are reunited between two strips of Teflon felt (8- to 10-mm wide) provided that the coronary ostia are not compromised. In this study, we present a personalized version of the felt sandwich technique in order to support the entire aortic root externally without causing any aortic stenosis.

Following the cardiopulmonary bypass initiation and cross-clamping, an aortotomy is applied and the ascending aorta is transacted just at the supracoranary level. Regardless of the presence of dissection extending to the sinus of valsalva, aortic root is reinforced with the felt sandwich technique in case there is no aortic valve pathology. Unlike the traditional technique, two Teflon strips with non-identical width is prepared; these two strips are approximately 5-mm wide and 12-mm or wider, respectively (Figure 1A).

Avoiding contact with the origin of the coronary arteries, aortic root is slightly mobilized for the strip application by way of limited excision. The origin of the coronary arteries and surrounding tissues are left untouched in order to prevent potential iatrogenic traumas and further weakening while avoiding strip pressure over the coronary arteries. Then, the wider Teflon strip is placed outside the aortic circumference in order to cover the entire aortic root wall externally. Following this, the 5-mm wide strip is placed inside the aortic circumference. The aortic walls are sandwiched between the felt strips with a horizontal mattress by using 4-0 polypropylene sutures.

While placing the horizontal mattress sutures, sutures are applied from the upper side of the outer strip and the mid-point of the inner strip (Figure 1B, Figure 2). 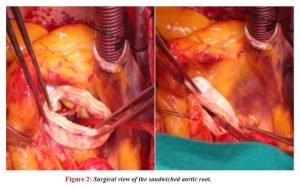 While placing the aortic replacement graft, 3-0 polypropylene running sutures pass through the bottom line of the inner strip and the brim of the outer strip, which prevents aortic stenosis caused by curled up inner strip (Figure 3A). In other words, if sutures go through the upper or mid-line of the inner strip instead of stabilizing the bottom of the strip, the strip will eventually bend inwards and cause discrete like stenosis (Figure 3B). As the sutures pass through the upper line of the outer strip, the strip is let reach down to the root base. In this way, the strip externally supports the entire aortic root (Figure 3A).

If aortic dissection patients have normal aortic valve with undilated or mildly dilated annulus, surgeons often prefer supracoronary graft replacement due to its technical simplicity and less invasive nature. However, aortic dissection mostly spreads to the aortic root resulting in weakened wall. There may even be additional etiological connective tissue disorders that might further weaken the aortic root wall.

Without one of the reinforcement techniques, proximal anastomosis of this area may cause uncontrollable bleeding and late postoperative aortic root dilatation along with progressive aortic regurgitation. To overcome these problems, many techniques ranging from the simplest methods such as the sandwich technique to more complicated approaches like Florida sleeve technique and its modified versions, which create a neo adventitia, have been suggested to support the aortic root and anastomotic area.1,2

Although these techniques offer effective solutions, Florida sleeve technique, its modifications, and similar techniques are time consuming and invasive methods. On the other hand, sandwich technique, simple as it is, may prove to be ineffective as it fails to support the entire aortic root causing surgical bleeding and late root dilatation. Traditionally, the dissected aortic layers are reunited by placing thin felt strips (8- to 10-mm wide) from inside and outside the circumference of the aorta without compromising the coronary ostia. In this method, however, the entire aortic root may not be supported.

Furthermore, this method may cause aortic stenosis if running sutures go through the upper or mid-line of the inner strip instead of stabilizing the bottom of the strip, which brings about a curled up inner strip and, therefore, discrete like stenosis. To prevent curling up inner strip I prefer a thinner strip (approximately 5-mm wide) instead of a traditional wider strip and take care to pass sutures through the bottom line of the strip. Safi et al. recommend a technique of interrupted pledgeted horizontal mattress sutures compared to the felt sandwich technique. In their experience, this provides superior stabilization and decreases risk of subsequent aortic stenosis.8

The suggested modification to the felt sandwich technique is a simple and effective way of supporting the aortic root externally as it also helps avoid bleeding.