Objective: Hyperhidrosis can cause significant professional and social handicaps. Thoracic endoscopic sympathectomy has become the surgical technique of choice for treating intractable palmar hyperhidrosis. Endoscopic thoracic sympathectomy can be carried out through multiple ports or by using a single port. A prospective study was undertaken to compare outcomes between two methods.

Conclusion: No difference between bilateral multiple ports and single port video-assisted thoracoscopic sympathectomies and both are effective, safe and minimally invasive procedures improving permanently the quality of life in patients with palmar hyperhidrosis.

Primary hyperhidrosis is an idiopathic condition characterized by excessive sweating particularly in response to temperature or emotional stimuli occurring in up to 1% of the population, with an apparent increased prevalence in countries of the Far East.(1) The areas of the body commonly affected in hyperhidrosis in order of frequency include the palms, feet, axilla, head, or face. These symptoms usually begin in childhood or adolescence, often representing an incapacitating and embarrassing disorder that can interfere with social and professional activities.(2)

Early surgical management for hyperhidrosis required an open thoracotomy. This was accompanied by a prolonged recovery period and significant morbidity including Horner’s syndrome.(3,4) However, with recent advances in video-assisted thoracoscopy, upper thoracic dorsal sympathectomy has been shown as a safe and minimally invasive procedure for palmar and axillary hyperhidrosis.(5) In addition, it can be performed using single or multiple ports.(6,7) The incidence and severity of complications following treatment with video-assisted thoracoscopy has been shown to decline, with reported incidences of Horner’s syndrome ranging from 0 to 1.9%.(8-11) This prospective study aims to show operative and postoperative results after simultaneous bilateral video-assisted thoracic sympathectomy using single versus multiple ports.

From January 2008 through June 2012, 71 patients (30 male and 41 female; aged 22 ± 5.3 years) were included in this prospective study at our department of cardiothoracic surgery, King Fahd hospital. All patients had experienced disabling hyperhidrosis of their palms since adolescence and had undergone medical therapy with topical agents without much improvement. The patients reported that the symptoms had significantly affected their work or social conditions. All patients underwent a careful clinical history; basic preoperative investigations were performed including chest x-ray. CT thorax is not routinely requested unless suggested by history, or an abnormal chest x-ray. Patients with secondary hyperhidrosis were excluded from this study.

Patients were consecutively randomized into two groups: Group A-35 patients underwent multiple ports video-assisted sympathectomy and Group B-36 patients underwent single port video-assisted sympathectomy. Informed consent was obtained before surgery and a study approval from the Ethics Committee was provided. Our protocol included a follow-up at one month postoperative and for one year. Follow-up data were obtained in all patients by telephone interview. Clinical examination was added only when the patient reported objective physical signs, such as Horner’s syndrome.

Surgery was performed under general anesthesia and one-lung ventilation using a double-lumen endotracheal tube. Patients were placed in semi-Fowler’s position with arms gently abducted. A small roll was placed transversely behind the scapulae to slightly elevate the axilla from the operating table. A fingertip pulse oximeter probe was used to record the changing pattern of the plethysmographic curve on the operated side. The surgeon stood at the side, facing the patient, and the video screen was positioned above the patient’s head.

In multiple ports group, after exclusion of the lung, a 5-mm, 0 degree telescope (Karl Storz, Germany) and two additional 3-mm ports for micro instruments. The sympathetic chain is easily identified under the parietal pleura, running vertically over the necks of the ribs in the upper costo-vertebral region. The mediastinal pleura was opened and the sympathetic chain was dissected, severed, and removed from the second thoracic ganglion (T2) to the third (T3). Dissection was carried out with high-frequency cautery except at the level of T2, where no coagulation was used to prevent current diffusion to the stellate ganglion.

Generally we continue the dissection by cauterizing/dividing the pleura for 5 cm lateral to the chain including an aberrant nerve bundle of Kuntz if identified. The transected ends of the sympathetic chain are separated as far as possible and cauterized to prevent regrowth of the nerve and recurrence of symptoms. Care should  be taken not to divide the sympathetic chain above the level of the second rib for the treatment of palmar hyperhidrosis, because it increases the risk of Horner’s syndrome and contributes little benefit.  In single port group, after exclusion of the lung, a single, 1-cm-long incision was made for insertion of a 12-mm trocar (Endopath, Ethicon Endo-Surgery, Inc., Cincinnati, OH, USA) into the pleural cavity at the third intercostal space in the midaxillary line. A straightforward, 0° operating thoracoscope (Karl Storz, Tuttlingen, Germany) was introduced. The dorsal sympathetic chain was identified running along the neck of the ribs close to the costovertebral junctions.

The first rib was always identified by direct vision or, in patients with adiposity, by palpation under visual control. The stellate ganglion (T1) was avoided. A diathermy hook (Jarit 600-305, Tuttlingen, Germany) inserted through the thoracoscope was used to completely divide the sympathetic trunk over the neck of the second and third ribs (T2–T3) including the rami communicanti and the accessory fibers of Kuntz, if present. At this level, the chain was divided with diathermy cautery after gentle anterior traction on the nerve; hook recoil after division was avoided to prevent vascular or lung injury. In order to destroy all the accessory sympathetic fibers, we dissected the pleura along the second rib up to approximately 5 cm lateral to the sympathetic chain.
In both groups, the entire procedure was then repeated on the opposite side, without changing the position of the patient or the operative setting. Complete ablation of the ganglia was validated by the presence of peripheral vasodilatation, warm and dry hands, and an instant change in amplitude of the waveform patterns of the pulse oximeter, indicating an increase in circulation after sympathectomy. At the end of the procedure, a temporary 10-Ch chest tube was inserted into the thoracic cavity through the surgical incision and connected to a water-seal system applying a mild suction. After reinflating the lungs, the chest tube was quickly removed and the incision was closed. A chest X-ray was performed during the first postoperative day before the discharge to ascertain complete lung expansion.
All patients received postoperative analgesics and all patients were seen one month after the operation and follow up for one year. Follow-up data were obtained in all patients by telephone interview. Clinical examination was added only when the patient reported objective physical signs, such as Horner’s syndrome.
Data analysis
Preoperative data were collected regarding the patients’ demographic details. Also, we evaluated the effect of two operative techniques on the following clinical outcomes: operative time which was defined as the interval between first port incision and completion of wound closure; intra-operative complications; postoperative complications include pneumothorax, hemothorax, Horner’s syndrome, recurrence and compensatory sweating; postoperative length of hospital stay which was defined as the interval between date of intervention and date of hospital discharge; and perioperative mortality rate which was defined as the percentage of patients who died of causes related or unrelated to disease or procedure within 30 days of surgery.
Statistical Methods
The data associated with the multiple ports and single port video-assisted sympathectomies were calculated and expressed as percentage and mean ± SD in different situation by using paired t test. Differences were significant at P Value< 0.05. All analysis was performed with the SPSS 13.0 for Windows (SPSS Inc, Chicago, IL). 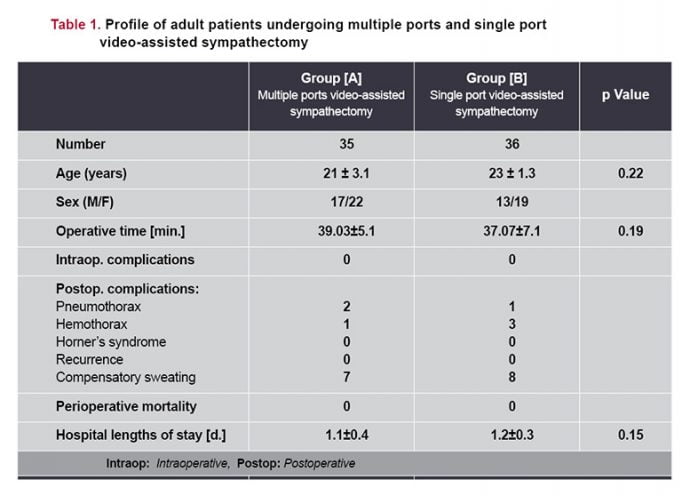 In both groups, the success rate was 100%, there were no cases of Horner’s syndrome (ptosis) and there was no perioperative mortality. Residual minimal pneumothorax occurred in two patients (5.7%) in group A and in one patient (2.8%) in group B. Minimal hemothorax occurred in one patient (2.9%) in group A and in three patients (8.3%) in group B. In our patients, all pneumothoraces were small, limited, and resolved without chest tube placement. Also, hemothorax was small and none needed drainage.

Compensatory hyperhidrosis was affecting trunk and/or abdomen encountered in seven patients (20%) in group A and in eight patients (22.2%) in group B. The difference in the rate of compensatory hyperhidrosis in the two groups was not statistically significant and the symptoms were not severe enough to interfere with lifestyle, and this required no further treatment. Parenteral analgesia was not required and postoperative pain was managed effectively in both groups with oral analgesics alone. Follow-up of all patients for one year revealed no recurrence of symptoms and all patients maintained dry hands.

Thoracotomy was the standard surgical approach for hyperhidrosis(12) but the introduction of video-assisted thoracoscopic surgery (VATS) and the advances in video-endoscopic technology had replaced open surgery for performing sympathectomy, determining a shorter hospital stay, reduced morbidity rates, less pain and better cosmetic results for a non-life risk disease.(13) Video-assisted thoracoscopic sympathectomy usually done through multiple ports but more recently, the integration of electrocautery/diathermy to the thoracoscope permits a single-port procedure and this approach