Aim: To find out safety and efficacy of synchronous CEA in patients undergoing CABG.

Results: None suffered from myocardial infarction (MI) during perioperative period.Postoperative recovery period – 13,5 ± 0,8 days. During the follow-up period of 12 months, one patient died of cardiovascular causes (stroke).

Stroke is a serious complication after CABG surgery, occurring in up to 3% of patients, patients with significant carotid disease represent a particularly high-risk category of patients.[1] Approximately 8-10% of patients scheduled for coronary artery bypass graft (CABG) surgery, have significant but asymptomatic internal carotid artery (ICA) stenosis. Regarding to the North American Symptomatic Carotid Endarterectomy Trial (NASCET)[2] and Asymptomatic Carotid Atherosclerosis Study (ACAS)[3] carotid endarterectomy (CEA) reduced the risk of stroke in patients with ICA stenosis. During the last decade CEA is increasingly being performed alongside of CABG surgery for stroke prophylaxis. During this procedure cardiac surgeons are aiming to minimize the risk of stroke either by revascularizing the stenotic carotid artery followed by CABG or in the reversed fashion.

However, some authors consider that the patients who undergo CABG prior to CEA have increased risk of stroke. On the other hand patients undergoing to CEA prior to CABG, have higher risk of myocardial infarction (MI).[4] In order to decrease the rate of mortality and risk of MI and stroke, performing a CEA and CABG simultaneously (CEA/CABG), can be safe and effective alternative for staged approach. In this study we performed a retrospective analysis of safety and efficacy of CEA combined with CABG in patients with severe carotid stenosis requiring CABG surgery.

Data of all patients who underwent CABG in our hospital (total 711) from January 2013 to December 2017 were analyzed, of this 45(6,3%) patients had concomitant carotid and coronary artery stenosis, 18 (2,5%) of them needed simultaneous surgery (Picture 1). In recent study only these 18 patients, operated simultaneously were included. 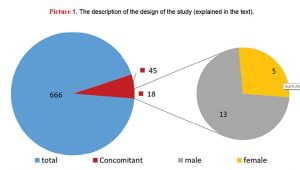 Most patients had history of previous myocardial infarction or neurological disorders (patients characteristics are given in Table 1). To assess the degree of stenosis of ICAs, carotid Doppler was done preoperatively in all patients. Computed tomography angiogram (CTA) or magnetic resonance angiogram (MRA) was done to confirm the degree of stenosis in patients who had 50% or more stenosis of carotid artery on carotid Doppler. 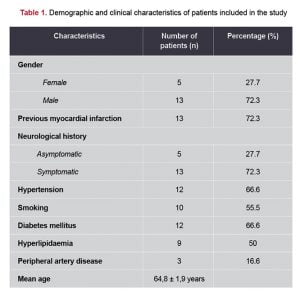 Carotid stenosis was defined as severe if stenosis was >70% and symptomatic if there was any history of stroke or transient ischemic attack (TIA) within last 6 months involving same side. Near total occlusion was defined as severe stenosis of >95% with distal collapse of vessel. The main indications for simultaneous surgery were the need for myocardial revascularization with concomitant 1. More than 70% symptomatic stenosis of the carotid artery (with or without contralateral disease) or asymptomatic more than 70% bilateral carotid artery stenosis.

The eligibility for CEA along with CABG or isolated CABG was determined based on the joint decision of the cardiologist, cardiac surgeon, and neurologist. Patient with intracranial stenosis that exceeded the severity of the extracranial stenosis were excluded. Patients with total occlusion of internal carotid were also excluded. (characteristics of patients regarding to coronary and carotid artery stenoses described in Table 2-3).

All patients underwent carotid artery ultrasonography, coronary angiography, and neurological examination prior to surgery. In 45 of cases (6,3%) the concomitant carotid artery stenosis was diagnosed. Simultaneous intervention on the carotid and coronary arterial systems was performed in 18 patients (2,5%). The CEA was done prior to the median sternotomy and after harvesting the conduits; off-pump CABG was followed thereafter. CEA was performed by a vertical incision anterior to the sternocleidomastoid muscle, thus exposing the common carotid artery, ICA, and the external carotid artery. The patient was heparinized by giving 2 mg/kg heparin. The artery was opened through a longitudinal incision followed by an endarterectomy. The arteriotomy was closed either directly or by a saphenous vein patch (Picture 2). 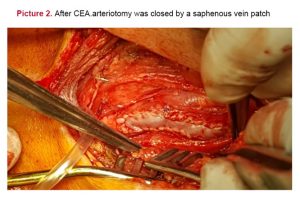 Care was taken to keep the systolic blood pressure above 120 mmHg and, inotropic agents were started if needed to maintain adequate blood pressure and cerebral flow. The neck wound was closed with a drain, followed by the median sternotomy, systemic heparinization and a off-pump coronary artery bypass grafting (17/94,4%), in one case (5,6%) due to unstable hemodynamics, the coronary artery bypass was performed on-pump. A stabilization systems were used for mechanical stabilization of the heart while performing all distal anastomosis. Intracoronary shunts were used in most of the patients (Picture 3) to maintain blood flow through the coronary arteries, at the end of procedure heparin was reversed by protamine. 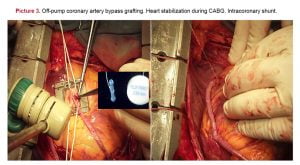 In our center, all postoperative CABG patients undergo continuous cardiac monitoring for the first 2 postoperative days. A 12-lead electrocardiogram is also done daily for first 3 days after surgery in all patients. None suffered from perioperative ischemic stroke, but one patient with near total occlusion (asymptomatic) suffered from hemorrhagic stroke on ipsilateral side following CEA. All the patients were followed-up till discharge from the hospital. None had any cardiovascular or cerebrovascular complication during this period. There were no any deaths from cardiovascular or any other cause. CT was done in three patients, who had delirium in the early postoperative period, and it did not reveal any fresh ischemic infarction. Their delirium was attributable to perioperative encephalopathy (pain, intensive care unit (ICU) setting). All the patients were discharged from the hospital in stable condition without any fresh neurological deficits (Table 4). Patient with perioperative hemorrhagic stroke following CEA also recovered well (mRS 0-1) at the end of 1 month. 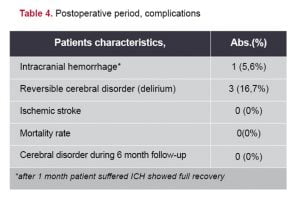 The prevalence of haemodynamically significant (>50%) or severe carotid disease (>80%), in patients with severe coronary artery disease (CAD) scheduled for CABG has been estimated to be around 6 -17%.[1,2,3] Regarding to a systematic review, the risk of stroke after CABG was <2% in patients with no significant carotid disease, 3% in asymptomatic patients with 50-99% stenosis, increasing to 5% in those with bilateral 50-99% stenosis and 7-11% in patients with carotid occlusion.[8,12] Moreover, the risk of perioperative stroke in CABG patients suffered from previous TIA or stroke has been associated with a fourfold increased risk as compared to the risk for asymptomatic patients.[9,10] In our series the overall incidence of combined carotid and coronary artery stenosis was 6%. Carotid endarterectomy (CEA) has been well studied in the setting of both symptomatic (North American Symptomatic Carotid Endarterectomy Trial and European Carotid Surgery Trial) as well as asymptomatic (Asymptomatic Carotid Atherosclerosis Study and Asymptomatic Carotid Surgery Trial) individuals with isolated severe carotid disease.[5,6]

Nowadays CEA is routinely performed in the setting of CABG surgery in an attempt to improve perioperative outcomes. The operative strategies for combined severe carotid and coronary disease include: (1) CEA followed by CABG (staged); (2) combined CEA and CABG; and (3) CABG followed by CEA (reverse staged).[4,9,10]

But there are still lack of data regarding to evaluating the safety and efficacy of CEA–CABG procedures. AHA recommends that for patients with a TIA or ischemic stroke within the past 6 months and ipsilateral severe (70-99%) CAS as documented by noninvasive imaging (CD, CTA, and MRA), CEA should be done, if the perioperative morbidity and mortality risk is estimated to be less than 6%.[14,16] All our patients were admitted primarily for symptomatic CAD and were planned for CABG based on joint decision of cardiologists and cardiothoracic surgeon.

Carotid Doppler was done as a part of routine screening in all these patients, which revealed carotid stenosis in 45 patients. Decision to do CEA along with CABG was done in 18 eligible patients on the basis of CTA findings. The combination of carotid Doppler and CTA is an acceptable method for the quantification of severe CAS in a substantial number of patients.[15] Decision was based on clinical data; 18 patients scheduled for CABG with concomitant 1. More than 70% symptomatic stenosis of the carotid artery (with or without contralateral disease) or asymptomatic more than 70% bilateral carotid artery stenosis, underwent to simultaneous CEA and CABG.

A recent RCT showed that patients undergoing prophylactic or simultaneous CEA + CABG had low stroke rates (0%), without significant perioperative mortality. Overall risk of all types of cerebrovascular complications (stroke, MI, and death) was low during and early after combined CEA + CABG.[11,12,13] Out of 18 patients opted for combined approach, none suffered from ischemic stroke after surgery. Only one patient with near total occlusion had ipsilateral ICH because of hyperperfusion syndrome. A rapid restoration of normal perfusion pressure following CEA may result in hyperperfusion in regions of the brain that have impaired autoregulatory capacity.[18]

Risk factors for this syndrome include long-standing hypertension and high-grade stenosis. This patient suffered from faciobrachial paresis, and made almost complete recovery within 1 month. Because carotid revascularization has proven its value in preventing risk of future ischemic stroke in patients with severe carotid disease, it seems appropriate to correct it in conjunction with CABG to achieve any additional protection from perioperative stroke that this approach may provide. Synchronous CEA/CABG also offers the economic benefit of avoiding two separate procedures/hospitalizations and advantage of patients being exposed to only one anesthesia.[19]