Objective: Recently, the soluble CD14 subtype; presepsin (PSP) has been suggested as a reliable marker for systemic inflammation, which has not been studied in decompensated heart failure (DHF) up to date. Our aim was to investigate plasma PSP levels and its diagnostic ability in patients with DHF.

Methods: Fifty patients with DHF and 51 controls without HF were included in our study. Besides routine clinical and laboratory data, N-terminal prohormone of brain natriuretic peptide (NT-pro BNP) and PSP levels were measured in blood samples of all the participants.

Conclusions: This preliminary study reveals that PSP levels are significantly elevated in patients with DHF but the diagnostic power of PSP for DHF is lower than NT-pro BNP. PSP may be a new marker for DHF.

Decompensated heart failure (HF) is a clinical syndrome caused by many conditions resulting in reduced cardiac output.(1) There are many pathophysiological mechanisms of HF besides cardiovascular pathologies, and inflammation is one of them.(1) The correlation between C- reactive protein (CRP) and the severity and prognosis of HF is a good example for the role of inflammation in the development of HF.(1) Besides CRP many other inflammatory markers such as cytokines, tumor necrosis factor 6 (TNF-6), interleukin 6 (IL6), oxidative stress markers and leukocytosis have been shown to be involved in the onset and development of HF.(1,3) Recently, natriuretic peptides have been used for screening, diagnosis and prognosis of acute HF.(1)

However, their plasma levels are affected by some clinical situations such as renal failure and they may not be reflecting all of the pathophysiologies underlying HF.(1) Presepsin (PSP) is a novel inflammatory marker.(4) Several clinical studies suggest PSP as an acute phase reactant similar to CRP.(5) Monocytes, macrophages and neutrophils express a cluster of differentiation (CD) surface glycoprotein named CD14.(6) CD14 forms a circulating soluble subtype after activated by plasma proteases which is named as sCD14-ST, also known as PSP.(6) Although the diagnostic power, prognostic value and mortality predictive capacity of PSP have been widely evaluated and accepted in sepsis, almost no publications about the association between PSP and heart failure has been available in literature to date.(4,7,8) Our aim in this study was to investigate plasma PSP levels and its diagnostic ability in patients with acute decompensated HF.

Study population
This observational comparative study was conducted in a tertiary referral center. In this study, we used the methods of our previous study.(9) Fifty patients admitted to coronary care unit with acute decompensated HF and 51 age-matched control group patients without HF as verified by echocardiography were enrolled in this study. The study protocol was approved by the local ethics committee review board. The study complied with the Declaration of Helsinki and informed written consent was obtained from all patients included in this study. The patient group was consisted of patients admitted to coronary care unit with symptoms and signs of acutely decompensated HF (New York Heart Association Classification 2 to 4) as in described by related European Society of Cardiology guideline and left ventricular ejection fraction lower than 40% as shown by echocardiography.(10) We included both de novo and previously known HF patients regardless of the etiology. We were excluded some specific cardiomyopathy phenotypes such as hypertrophic cardiomyopathy, peripartum cardiomyopathy and alcoholic cardiomyopathy.

Laboratory measurements
Blood samples for PSP and other biochemical measurements were taken from the patients once the diagnosis of decompensated HF was made and volunteers in the control group. All of the laboratory measurements of the study participants consisting of white blood cell count (WBC), high sensitive CRP (hsCRP) and creatinine were performed. Blood samples for PSP measurement were obtained by vein puncture into ethylene diamine tetra acetic acid (EDTA) blood collection tubes without additives and immediately centrifuged at 2500 rpm for 10 minutes.(9) The serum was collected and stored at -80 ºC until analysis up to six months. The samples were thawed out once. 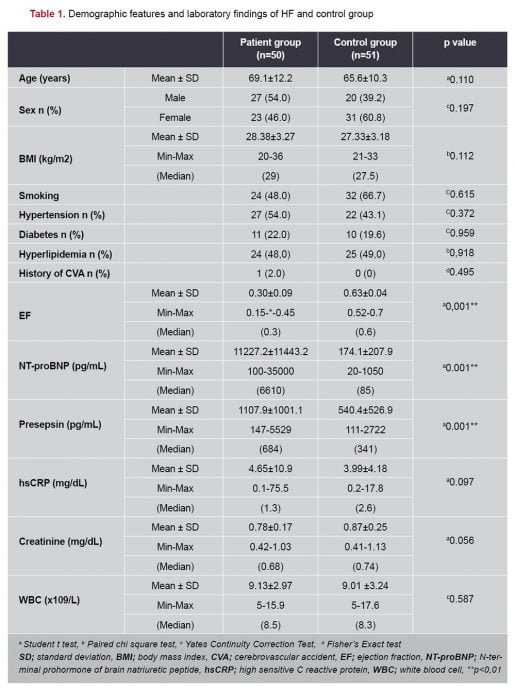 IIn this study, we investigated the diagnostic ability of PSP in patients with decompensated HF. The results revealed that PSP was significantly increased in patients with decompensated HF compared to controls, but it was not correlated with NT-proBNP, hsCRP and WBC, and the diagnostic power of PSP to diagnose decompensated HF was statistically lower than NT-proBNP. Various cardiac and non-cardiac disorders may cause HF by different pathophysiological mechanisms.(1,12) Systemic inflammation plays a role in all steps of HF and could be the reason of HF onset or impairment of a previously stable HF.(1,12,13)

It is widely accepted that inflammatory mediators may deteriorate cardiac function Leukocytosis and monocyte or macrophage levels are correlated in post-myocardial infarction patients with HF.(3) Up to date, many inflammatory biomarkers have been identified to recognize and to make risk stratification in patients with HF.(1,13) Among them, hsCRP, TNF”α” and IL6 are the mostly studied ones.(1,12,13) However, traditional laboratory tests could not efficiently reflect the progression of HF.(12) One of the receptors of monocyte / macrophage specific cluster of differentiation and lipopolysaccharide (LPS) / LPS-binding protein (LBP) complexes is CD14.(4,7) Cleaved N- terminal fragment of CD14 is called PSP glycoprotein.(4) PSP normally exist in healthy people’s blood for a certain amount and increase in response to inflammation.(4,7)

We showed median serum PSP level 341 pg / mL ranging between 111 and 2722 pg / mL in the control group. This result is consistent with other studies which mostly report PSP levels as 55 – 600 pg / mL.(14,15) The wide range of PSP levels among studies may be due to the selection bias of the subjects or the method of PSP measurement.(2,16) We measured PSP with chemiluminescent enzyme immunoassay method which is the most used method in other studies.  It has been demonstrated that increased PSP levels are correlated with the existence, severity and prognosis prediction of systemic inflammation.(4,17,18) Masson et al demonstrated that PSP levels were higher in patients died as a result of severe sepsis or septic shock than survivors, and suggested to measure PSP for early risk stratification in these patients.(18)

The roles of PSP in different clinical situations have also been evaluated.(7,14,19) Klouche et al showed the usefulness of PSP in patients with severe sepsis, septic shock and severe community-acquired pneumonia and found that the level of PSP increase was different among subgroups.(19) Endo et al stated that PSP is one of the most predictive markers of sepsis and is more valuable than blood culture.(20) Shozushima et al reported that PSP is comparable to procalcitonin for the diagnosis of infections and clinical specificity of PSP is much higher than procalcitonin.(21) Hou et al reported that PSP is a sensitive predictor and a useful monitoring marker in patients with systemic inflammation and nephrolithiasis.(7) Olad et al measured PSP in patients with chemotherapy induced severe neutropenia and demonstrated that PSP was significantly higher in patients with culture positive infections but was not sensitive enough to detect culture negative bacteremia.(8)

Diagnostic cutoff value of PSP was ≥ 472 pg / mL for HF in our study. Our results showed that PSP had the acceptable pooled sensitivity (0.76) and pooled specificity (0.63). Accordingly, the AUC was 0.74, indicating that the PSP had a moderate diagnostic efficiency. Zheng et al’s meta-analysis reported the results of 8 studies conducted on the patients with severe systemic inflammation and demonstrated the sensitivity range of PSP as 0.71-0.93 and the specificity range as 0.60-0.86.(17) Our study results are consistent with these ranges. PSP levels are affected by kidney function because of its low molecular weight.(14)

PSP is filtered by the glomeruli, reabsorbed and catabolized by proximal tubular cells.(14) Nagata et al studied PSP levels in patients with different stages of chronic kidney disease and demonstrated that PSP levels increase as eGFR decrease.(14) Behnes et al. showed the correlation between PSP and creatinine levels and the number of days on renal replacement therapy in patients in intensive care unit.(5) For that reason, we did not include the patients with eGFR lower than 60 mL / min / 1.73 m2 in the study. We did not include patients over 70 years old based on the study of Chenevier-Gobeaux et al.(24) They revealed significantly increased PSP levels in patients older than 70 years old compared to patients younger than 70 years old.(24)

Biochemical and hematological markers are important predictors in development and diagnosis of cardiovascular diseases.(25,26) In our previous study, we also reported that PSP levels were significantly elevated in acute ST elevation myocardial infarction patients together with high sensitivity troponins, which may be a novel supporting marker for acute myocardial infarction.(9) It has recently been reported that elevated preoperative plasma presepsin concentration is an independent predictor of postoperative mortality in cardiac surgery patients and PSP is a stronger predictor than other powered markers such as procalcitonin, NT-proBNP and cystatin C.(27) We also investigated PSP levels in well-controlled hypertensive patients and compared to healthy controls.(28) The results revealed that PSP levels were significantly lower in patients with well-controlled hypertension than healthy controls, which may be related to anti-inflammatory effects of antihypertensive agents.(28)

We also compared PSP with NT-proBNP being a biomechanical stress marker for HF recognized by the related guidelines.(10) A large body of evidence from clinical and experimental studies demonstrated NT-proBNP as a precise mortality and morbidity predictor for HF.(29,30) Although PSP levels were significantly increased in patients with HF, the results were not correlated with NT-proBNP levels in the present study.

Moreover the sensitivity, specificity and predictive value of PSP to recognize HF were lower than NT-proBNP. The diagnostic accuracy of PSP in HF was not superior to that of NT-proBNP. Our study does have some limitations. This study is a small, single centered, observational study. Biomarker follow-up during HF setting is of fundamental clinical importance. We were able to measure PSP once, so we may have missed the biological intra-individual variation over time. We were not able to compare PSP levels and NYHA class because the number of patients was not enough. Despite above limitations, the strength of this study comes from that it has revealed increased PSP levels in patients with decompensated HF up to date.