Objective: Diabetics with coronary artery disease face a high risk of adverse events following coronary revascularization. However, recurrence rates of after the first revascularization have never been appraised. The aim of this study was to evaluate recurrent events in diabetics undergoing percutaneous coronary intervention (PCI) in the current era.

Conclusion: This work, originally reporting on risk of recurrent repeat revascularization events among diabetics treated with PCI, showed that adverse events occur frequently in these patients, but can be managed in most cases safely and successfully by means of repeat PCI only.

Many complications develop in diabetics: microvascular complications, including retinopathy, nephropathy, and neuropathy, and macrovascular complications, and including cardiac, cerebrovascular, and peripheral vascular complications.[1] Cardiovascular disease is the principal cause of death and disability in people with diabetes as it recognizes a unique pathophysiology.[2] Several features of atherosclerosis make diabetic patients 2 to 4 times more likely to develop coronary artery disease than non-diabetic patients and to manifest this condition earlier in life. moreover, many observational and experimental data showed a worse prognosis for diabetics experiencing a myocardial infarction (MI) or undergoing coronary revascularization.[3] The presence of several comorbidities, multivessel and diffuse coronary disease with small vessel diameter, long lesions and plaques prone to rupture, together with accelerated atherosclerosis progression, compromises periprocedural and long-term outocomes of both coronary artery bypass grafting or percutaneous coronary intervention (PCI).[4] Indeed, owing to its unique pathophysiologic milieu and unfavorable anatomical pattern, diabetes makes either revascularization approach seemingly suboptimal. Diabetic patients thus clearly need, in addition to optimal medical therapy, various therapeutic strategies for myocardial ischemia tailored to the different stages of disease.

In such a setting, many studies have explored the long-term risk of single or first ever adverse events after coronary revascularization in diabetics,[5] but none sistematically appraised to date the risk of date the risk of recurrent and repeat adverse events, e.g., PCI followed in the same patient by bypass grafting and then another PCI. We thus aimed to retrospectively assess intermediate and long-term recurrences of major adverse cardiac events and repeat target vessel revascularizations in a cohort of diabetic subjects undergoing PCI.

Specifically, a series of 429 consecutive patients were enrolled according to the following criteria: 1) previous or new diagnosis of type 2 diabetes mellitus according to contemporary American Diabetes Association criteria,[6] with patients classified as “non-insulin requiring”, including patients treated with diet and/or oral hypoglycemic drugs but no insulin, and “insulin requiring”, including patients treated with insulin regardless of other therapies; and 2 treatment with PCI between July 1, 2002, and December 31, 2005 at our Center, with implantation of bare-metal stents and/or drug eluting stents. Age, acute ST-elevation MI, combined treatment with the implantation of both bare-metal and drug eluting stents in the index procedure were not exclusion criteria.

All patients completed a written informed consent form, and institutional Ethic Committee approval was waived given the observational design of the study. All procedures were performed according to standard guidelines for PCI,[7] but interventional strategy and choice of device were decided by the attending physician Patients who were not chronically receiving aspirin, were pretreated with a 500 mg oral loading dose at least three hours before the procedure, or a 300 mg intravenous loading dose directly before the procedure. Premedication included also a loading dose of 300 mg of clopidogrel the day before a planned procedure or 600 mg at least two hours before a procedure for non-ST- elevation acute coronary syndrome. All patients received intra-arterial unfractioned heparin to maintain an activated clotting time longer than 250 seconds.

The use of glycoprotein IIb/IIIa inhibitors was left at the operator’s preference. Angiographic success was defined as residual diameter stenosis<30% by visual estimate in the presence of a thrombolysis in MI grade 3 flow. Revascularization was considered functionally complete in case of effective treatment of all epicardial vessel with diameter >2.25 mm, supplying viable areas of left ventricular myocardium, and affected by a diameter stenosis 75% by visual estimate. After the procedure all patients were prescribed lifelong aspirin (70-325 mg/d). In addition, one month of clopidogrel (75mg/d) or ticlopidine (250 mg twice a day) was recommended for patients treated with bare-metal stents, at least three-six months following drug-eluting stent implantation, and, in any case, at least 9-12 months following a non-ST-elevation acute coronary syndrome.

The primary outcome measure of this study was the cumulative incidence in hospital and at follow-up of major adverse cardiac events (MACE), defined as the composite of 1) cardiac death (all death were considered cardiac unless an unequivocal non-cardiac cause could be established); 2) MI;[8] 3) target vessel revascularization (TVR, any repeat percutaneous intervention or surgical bypass of any segment of the target vessel).The target vessel was defined as the entire major coronary vessel proximal and distal to the target lesion, which includes upstream and downstream branches and the target lesion itself. Any percutaneous procedure planned to complete the index revascularization was considered part of the index procedure, not a repeat revascularization.

Continuous variable are presented as mean standard deviation or median and interquartile range. Student’s test and/or analysis of variance were performed to determine differences between mean values. Categorical variables are reported as absolute values and percentage with 95% confidence intervals, with comparisons made with the chi-square test or Fisher exact test where appropriate. Two-tailed probability values <0.05 were considered statistically significant. Data were analysed with CIA, EpiInfo ad SPSS softwares.

A total of 429 subjects met the study inclusion criteria. Baseline characteristics according to sent type are presented in Table I. Overall, age was 67.3 10.2 years, and 69% of the patients were male. The clinical characteristics of the present cohort of patients than for diabetics in previously reported studies. Indeed, 88% (379 patients) had hypertension, 75% (323) had dyslipidemia, and their body mass index was 27.9 4.4 kg/m². Insulin-requiring diabetes was observed in 46% (195) of subjects and often the index procedure was not their first original revascularization procedure, as 40% (173) had experienced, as 40% (173) had experienced a previous MI, 26% (110) a previous coronary angioplasty and 18% (79) a prior bypass surgery. Diagnosis at admission was stable angina or silent ischemia for 29% (126) of patients. Compared with subject who received drug-eluting stents, those who received bare-metal stents had a more severe clinical profile: they were older (P<0.01), ha poorer left ventricular ejection fraction (P<0.01) and more diffuse atherosclerosis (ie concomitant peripheral artery disease, P<0.01). The duration of dual antiplatelet therapy was 5.0 2.7 month after drug-eluting stent implantation, 1.0 2.7 month after bare-metal stenting, and 4.9 2.6 months after combined treatment with both drug-eluting and bare-metal stents. In 6% (24) of cases dual antiplatelet therapy was not administered at discharge because of drug intolerance. 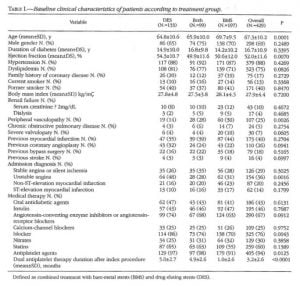 As show in Table II, multivessel disease was present in 73.6% (316) of subjects, 3 1.7 lesions were treated per patient, and 3 1.8 stents were implanted per patient. Concerning stent type, 197 (46%) received only bare-metal stents, 133 (31%) received only drug-eluting stents (sirolimus or paclitaxel-eluating stents), and 99 (23%) received both bare-metal and drug-eluating stents. There were significant differences between these groups in terms of angiographic characteristics, with a more complex procedural profile for patients treated with both stent types, and an excess of drug-eluting stent implantation at bifurcation lesions and unprotected left main (all P<0.05). Follow-up duration was thus 41.0 12.2 months (median 38.5 months,interquartile renge). 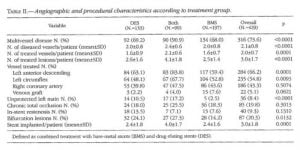 The three-year cumulative incidence of MACE was 38.9% (167) with a significantly better outcome in the drug-eluting stent only group. The overall rate of MI was 9.8% (42), with only 1 (0.2%) patient facing a second MI. Revascularization procedures occurred as follows: bypass grafting in 2.6% (11), first percutaneous TVR in 6.7% (29), third percutaneous interventions on epicardial vessels not previously treated: 1.1% (52) of patients underwent a first percutaneous non TVR, 1.6%(7) a second percutaneous non TVR, 0.5% (2) a third percutaneous non- TVR. Comparisons between groups showed that patients treated with bare-metal stents had a significantly higher cardiac (P=0.03) and non cardiovascular mortality (P=0.01), data to be read together with their older age at the time of index procedure (P<0.01) and longer follow-up duration (P<0.01).

We adjudicated 9 (2.1%) definite stent thromboses: 4 (0.9%) occurred within 30 days from index procedures (early), and 5 (1.2%) occurred following this period (late or very ate). Of note, no difference in incidence of definite, probable and possible stent thrombosis was detected among stent type groups (P=0.09, P=0.88 and P=0.55 respectively). Finally, subgroup analysis showed a higher frequency of all causae death (22.6% vs 9.8%, P<0.01) and MI (13.8% vs 6.4%, P<0.01) for insulin requiring diabetics compared to non insulin requiring patients. (Figures 1-5) allow to follow the assignment of study population to all possible outcomes, particularly to follow the real sequence of revascularization events. 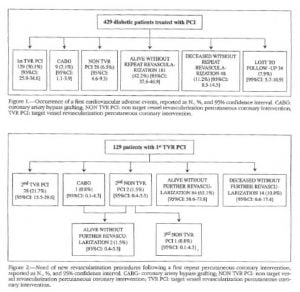 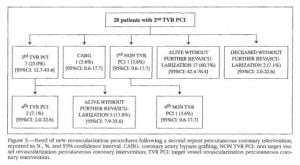 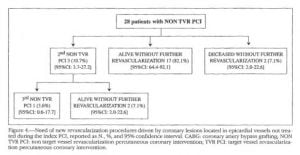 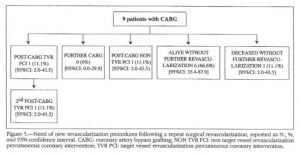 The main findings of this study, appraising the problem of recurrent events in diabetics undergoing percutaneous revascularization, are as follows: 1) repeat target vessel and non-target vessel revascularization occur frequently in this patient population, but can be managed in a safe and successful fashion by means of repeat PCI in most cases; 2) the sequence of revascularization events may be very complex in a minority of subjects, thus the treatment of any new adverse event should be individualized and clinically driven, but also based on coronary anatomy and addressed to the particular stage of diabetic disease; 3) careful clinical follow-up and maximal medical therapy remain pivotal in these patients, who can experience adverse events even several months or years following the index procedure and despite long periods of well being and freedom from angina or ischemia.

Diabetes mellitus is a recognised major risk factor for cardiovascular morbidity and mortality[12] and an independent predictor of restenosis after coronary stenting.[10] Several studies on the pathophysiology of diabetic coronary heart disease only partially explained the excess risk of adverse events by means of frequent comorbidities, conferring a crucial role to dysmetabolic features of diabetics condition itself and systemic inflammation.[2,11]

Unselected diabetics have a cardiovascular risk profile higher than patients enrolled in clinical trials. Their clinical and angiographic complexity may be the plausible explanation for the relatively poor short and long term outcomes reported in this study.

Notwithstanding the rather complete revascularization obtained with the index procedure and secondary prevention medical care at discharge, more than one third of patients underwent a percutaneous or surgical re-intervention. Both in-stent restenosis and disease progression led to multiple subsequent revascularization, with no single sequence of interventions yielding complete freedom from adverse events.

Our study is unlike to randomized trials or observational studies comparing performance of drug-eluating and bare-metal stents. Instead, we examined safety and efficacy end points long after the occurrence of first adverse events. We thus obtained detailed information on the influence of diabetes on the response of these patients to percutaneous revascularization. Considerable recurrences of intervention for myocardial ischemia emerged at three-year follow-up, a long period to explore device properties, but brief when related to diabetes disease duration. The phenomenon evaluated in our analysis may thus assume greater proportions in the whole history of disease of diabetics.

Further studies based on the present design should investigate a more homogeneous population with a longer follow-up. Nonetheless, coronary revascularization maintain a prominent role in managing the heavy burden of coronary disease in diabetics, and the percutaneous approach is likely to extend its applications thanks to growing evidence for safety and efficacy of drug-eluting stents. This observational study, the first to examine the risk of recurrent averse events, adds new important information to our knowledge of coronary stenting in real-world diabetics. A randomized clinical trial clearly appears unsuited to explore an objective as complex as multiple repeat revascularizations.

Selection bias should not be a major internal study limitation because losses to follow-up were 7.9% an acceptable number given the all-comers population and the long term clinical follow-up. We cannot however exclude that primary outcome measures could be underestimated since only symptoms lead to repeat interventions and no systematic angiographic control nor testing for silent ischemia was planned.

In conclusion, this study, originally reporting on the risk of recurrent repeat revascularization events among diabetics treated with PCI, shows that repeat target vessel and non target vessel revascularization occurs frequently in this patient population, but can be managed in most cases in a safe and successful manner by means of repeat percutaneous intervention.