Objective: In this study, we evaluated the results of open access and seldinger guided peripheral cannulation techniques in patients which underwent open heart surgery.

Results: 65 patients (32 male, 33 female; mean age 43±37 years; range 3-81 years) were taken into the study that peripheral cannulation performed. In 18 (27.6%) patients minimally invasive technique was applied and 34 (52.3%) patients were redo cases. A mean flow of 4,108±0.6 m2 l/m2/m was achieved with vacuum application in only 6 patients (9.2%) for venous drainage. No hemothorax, pneumothorax or hematoma had occured in cannulation sites due to internal jugular vein or femoral cannulations. Surgical embolectomy was performed due to distal thrombus only in 4 patients (6.15%) to whom had conventional cannulation. In 4 patients (6.15%) femoral venous cannula couldn’t reached up to the right atrium.

Conclusion: In our opinion, seldinger technique either performed percutaneously or surgically is a faster, easier and superior technique in protecting distal limb perfusion when compared with open vasculotomy with proximal/distal clamping technique. Moreover, it can be safely applied in high risk redo cases as well as routine minimally invasive surgery.

Recently peripheral artery and vein cannulation technique has become popular since the numbers of minimally invasive heart surgeries and redo cases are increasing. After a limited learning curve for the peripheric cannulation and application of vacuum to venous lines when is needed, efficient cardiopulmonary bypass can always be achieved. Implication of cannulation with percutaneous cannulas in peripheric veins and arteries is an innovation that eases the workload of surgeon in minimally invasive and redo cases. By means of percutaneous peripheric cannulation, extracorporeal circulation (CPB) can be even applied before the sternotomy to reduce the tension of massively adhered heart tissues underneath the sternum in order to overcome the possible perforation problems during the resternotomy if occures.

Decannulation can be performed more quickly. In redo cases, implication of CPB before sternotomy can decrase mortality and morbidity. In this study, the results of percutan and open peripheric cannulation techniques in open heart surgery were evaluated.

The results of heart surgery cases with peripheral artery-vein open surgery technique and seldinger guide technique between November 2010 and June 2017 were evaluated retrospectively.

The cases that include use of central cannulation because of changing strategy, urgent patients, infective endocarditis cases and the patients that had performed CPR and ECMO were excluded from the study. The outcomes of open surgery technique and seldinger guide technique for peripheric cannulation were evaluated as well as patients demographic datas.

Anaesthesiologist had also scrubbed and involved the operation site. Pump lines were taken into the surgery region. IJV and femoral artery and vein were evaluated for atherosclerosis, mobile thrombus, occlusion and diameter via doppler ultrasonography. For percutanous jugular vein cannulation, ponction site was marked preoperatively. For patients whom had percutanous right IJV cannulation plan, IJV ponction was maden in trendelenburg position and guidewire was placed into vein via seldinger technique (Figure 1). 1.5 mg/kg heparin was administered for partial anticoagulation. After dilatation, Edwards® Lifesciences Fem Flex II or Medtronic Bio-Medicus™ NextGen percutanous femoral cannule was placed into right IJV. 16 Fr cannules were used for patients to whom body surface area is under 1.7 m2, 18 Fr cannules were used for patients whom body surface area is above 1.7 m2. Cannules advanced approximately to right atrium entrance (10-15 cm) and fixed to skin. Following the flow rate was checked with aspiration, cannules were clamped. According to surgical plan, clamps were removed and providing a full return, 4/l/min flow rate was maintained during CPB.

In standart surgical cannulation planned cases, cannulation was made with arteriotomy after heparinization. Patients were taken into temporary CPB in order to check perfusion and cannulas were fixed (Figure 2). We chose right femoral cannulation because of its nearest position to the surgeon and easy to manupilate.

For patients whom planned minimally invasive surgery, aortic cross clamp was placed to ascending aorta using standard X clamps. Cardioplegia was administered through aortic root using standard cannulas. For de-airing, patient turned around to right side and trendelenburg position, ventricule and aortic root was punctured trans-septally with a 16G branule. Vent catheter was placed to right upper pulmonary vein. In case of defibrillation, external defibrilation pads were placed to the shoulder. 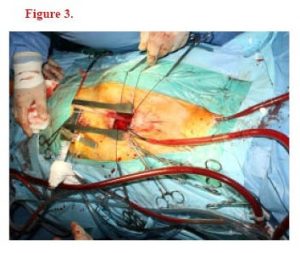 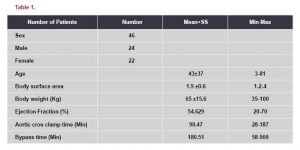 For 18 patients, minimally invazive technique was applied and 34 patients were redo cases. The operations are shown in Table 2. No pneumothorax or hemothorax were observed related to cannulation. Cannulas were placed successfully and sufficient venous drainage was maintained. In 4 patients(%6.15), femorale venous cannulas couldn’t advance to right atrium.

Limb ischemia occured in 4 patients (6.15%) who had open surgical peripheric cannulation performed. Therefore, due to distal thrombus, embolectomy was performed to those. No limb ischemia had occured in open seldinger and percutanous cannulation group.

Minimally invasive surgeries were performed via 13 ministernotomy and 5 minithoracotomy. In redo cases, neither signs of cardiac injury was observed nor hospital mortality. In postoperative follow-up, no hematoma was occured at IJV cannulation site. On the other hand, wound site complications at femoral cannulation site had occured in 4 patients (6.15%) therefore revision operations were performed (hematoma in 2 patient, seroma in 2 patient). IVC repairment surgery was performed in 1 patient due to İVC injury during femoral vein cannulation.

While peripheric cannulation performing, the cannulas stay out of surgical site thus, giving extra field for surgeon.(1-5) By this means, smaller incisions can be made. It enables both endoscopic view and port entry. It also provides CPB support before surgery so that surgical team can perform safely and faster. In the cases of thoracic surgeons who have a total circulatory arrest plan, the surgical team does not have to wait for cooling the patient by entering the pump in advance. Redo cases have high risk because of diffuse sternal attachment.

In these cases, performing peripheric cannulation before sternotomy provides reduction of ventricule tension by accumulating the blood partially into pump reservoir and decrase the risk of surgical bleeding. Cardiac dissection can be made comfortably.(1-7) In case of high risk complications or abundant bleeding during exploration in redo cases, periferic cannulation also provides cerebral perfusion.(7-10)

Periferic cannulation can be performed easily with advanced technology.(11-12) It can be made with seldinger technique, open or percutanous way as well as open arteriotomy, venotomy, proximal snaring and distal clamping. We recommend that the surgical seldinger method should also facilitates the bleeding control as well as maintaining of distal vascular perfusion can be also achieved by avoiding concervative distal clamping.

IJV percutanous cannulation and snaring enables to perform cases via right atrium like atrial septal defect (ASD), ventricular septal defect, tricuspid valve replacement (TVR), atrial mass, atrial tumor-myxoma with only peripheric cannulation. Kitahara and col. evaluated ASD closing with right minithoracotomy for perfusion strategy in 91 patients, and determine that femoral artery cannulation is safer.(18) It is advantageous to place cannulas percutanously using doppler usg before surgery.(11-12) In our cases, IJV cannulations were performed by anesthesiologists without any complications. In literature it is implicated that anesthesiologists must take part in cannulation.(1-5)

In liver transplant cases IJV cannulation complication rate is reported in 0.32-0.7% mortality rate while we had no canulation related morbidity and mortality. By taking this into considiration we perform 20-22F cannulation carefully. We can perform more comfortably in open surgery with seldinger method.

Keeping optimum and adequate venous return, a blood free and comfortable surgical site can be obtained.(1) For femoral and IJV cannulations we try not to exagerate the size of cannulae by not exceeding optimal sizes. Accordingly in patients with fragile veins, we choose to use one size smaller cannulae and apply vacuum when is needed. Guidewires can cause temporary arrhythmia due to myocardial irritation.

Retracting guidewires 1-2 cm will prevent arrhythmias. We use Edwards® Lifesciences Fem Flex II and Medtronic Bio-Medicus™ NextGen percutanous femoral canulas for peripheric cannulation.(1-2) Side hole and flexible structure are advantages of the cannulas. They are compatible for venous drainage. We choose cannulas according to patients neck and body length. For patients with short neck we use one size smaller cannulas. During cannulation, the neck is deviated to the counter side, sholders closed with trendelenburg position.

Axillar cannulation method in complicated cases with aortic surgery; Neurocognitive outcomes are better reported. Antegrade provides perfusion convenience. It is preferred today.(2-4) Axillary artery is recommended not to be preferred in cases of small arterial diameter because of diminished limb perfusion.(2-8) Central arterial monitoring is also not recommended in cases of distress.(1-3) Brachial plexus injury has been reported in the literature recently.(2-6)

Moreover, decannulation can be also performed fastly and safely. In percutan decannulation, about 10 min compression after protamine neutralization is usually enough. Cosmetic results are satisfying for patient. After open surgery seldinger cannulation, entry hole can be closed with primer sutures. Our study with 65 patients supports these results.

Extremity ischemia occured in 4 patients (6.15%) that open surgery peripheric cannulation performed, and due to distal thrombus, embolectomy was performed. No limb ischemia had occured in seldinger open and percutanous cannulation group. In addition to these study remarks, limb perfusion can be provided in seldinger technique that stabilized with only hanger tape without need of clamp or snare.

Suitable size and type of cannulas must be chosen in compliance to vessel quality. For fragile vessels Edwards® Fem-Flex II percutan femoral artery cannulas can be used safely. Guidewires must be checked whether it advances intavascularly, in case of hesitation, vascular positioninig must be performed with the help of X ray-scopy intraoperatively. Placement of venous cannulas must be checked with palpation after sternotomy and exploration.

They also suggest that distal perfusion must be checked with angiogram. Von Segesser and col. evaluated results of 407 patients that had been performed venoatrieal ECMO.(20) Ischemic complication rate is reported as 11-52%, need for surgical repair rate is 9-22%, leg amputation rate is reported as 2-10%. This study higlighted to watch out peripheral ischemia in arterial cannulation and to choose smaller diameter cannulas. And use of double way artery cannulas are suggested for maintaining the reperfusion.

There is no limitation in our randomized study because of retrospective evaluation. Our evaluation is unbiased because operations had been performed with same surgical and anesthesiologist team.

In the light of our study; we suggest that peripheric or percutaous cannulation provides a specific advantage in ‘redo cases’ besides the well known indications in minimally invasive heart surgery, aortic dissection and robotic heart surgery. Low morbidity and mortality can be achieved especially in even most difficult redo cases when peripheral cannulation performed prior to sternotomy. On pump sternotomy also brings the advantage of empting of right ventricule and atrium that reduces wall tension and risk of accidential rupture during the sternotomy. In emergency CPB and ECMO cases, femoral artery-vein and IJV peripheric cannulation with seldinger guide can also be performed rapidly and safely.