New type of pump for the heart-lung bypass system

Keywords: blood pump · perfusion · Pulsatille flow
Print
PDF - New type of pump for the heart-lung bypass system
Abstract
Full Text
References
Objective: Complications arising from roller pump usage in modern heart-lung bypass (HLB) systems are widely known. Alternative to roller pumps has existed as various devices. This work is dedicated to developing new, considerably simpler and less expensive pump device for HLB systems, which provides maximally physiological pulsating blood flow.
Material and Method: We used pediatric cardiotomy reservoirs of HLB systems as blood chambers. Two such reservoirs were placed in front of the oxygenator, with their in-flow tubes connected to the venous blood tubes, and the outflow tubes – to the entry to the oxygenator.  In each reservoir, 2 air outlets tubes were connected to pneumo-receivers of positive and negative pressure. We filled up one of the reservoirs whith closed of exit blood tube by creating negative pressure in it. Simultaneously, with closed entry blood tube of the second reservoir, we ejected blood from it by created positive pressure. Used external pulsator.
Results: In stand testing under re-circulation regime, productivity of the device was 12,5 liters/minute. Pressure on exit blood pump was within 0 to 300mm.Hg. The pump operating system enabled laminar, as well as pulsating flow of liquid, with frequency of 0-200 pulses/minute. Research is based on experiments conducted on 14 mongrel dogs weighing 20 kg. Standard methodology was used to cannulate Venae cavae and aorta, and to connect perfusion system to body. Duration of complete HLB reached 2 hours. Systolic pressure was maintained within 120-130mm.Hg.; diastolic  – 70-80 mmHg. Velocity of blood flow in the aorta arc fluctuated within 950-1100 ml/min; in the femoral artery – within 60-80 ml/min.
Conclusion: Preliminary tests of the new pump indicate that its hemodynamic characteristics are maximally approximated to physiological ones. In comparison to modern machines, a perfusion system with new pump type has minimal volume of fill-up and does not damage formative elements of blood.

Majority of currently operating systems of artificial blood circulation for heart-lung bypass applies roller pumps as injecting units.(4,7) Though currently these units and their control systems are very well developed, number of authors report on complications in the process of their functioning. Complications, related to the constructional characteristics of the roller pumps declare themselves in a form of homeostasis disorder of various degrees, buffer deviations, centralization of blood circulation, accumulation of sub-oxide products, impairment of entirety of membranes of the blood cells etc.(1,3,10,13) Non-physiological blood flow, caused by the roller pump in the aorta and large vessels is regarded as the major reason for such complications.

Numerous attempts of some authors to replace the roller pumps with other pressurizing devices(2,11) rema-ined within the experimental laboratories. At the same time, there exists the reliable alternative to the roller pumps – the artificial heart ventricles, which form in the arterial bed the flood flow maximally close to the physiological, excluding traumas of the blood cells.(6,12) Ventricular Assist Device are widely applied in clinics as the systems of assisted blood circulation, though they are not used in the HLB machines. Supposedly, this is caused by their high prices.

Development of new, simple and cheap perfusion device for HLB machines and study of their hydrodynamic characteristics in the experiments with animals.

As a basis model of the pump we used the device developed in our laboratory.(9) In the pump module of the developed device the blood accumulation and its forcing function was unified in two hermetic transparent reservoirs with rigid walls, with the volume selected for given experimental animal. For simplification of assembling of the experimental pump devices (see Fig. 1) used for relatively large test animals we employed cardiotomic reservoirs of used traditional children’s disposable HLB systems, with volume of 1000 ml each. 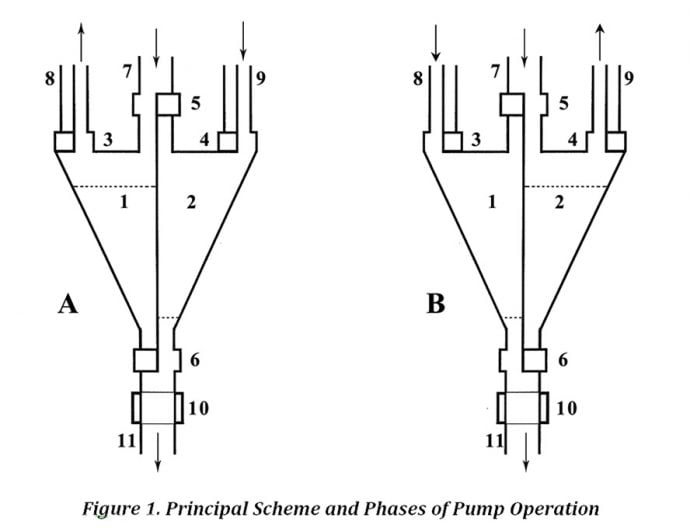 In the assembly scheme of each perfusion machine two such reservoirs were located before membrane oxigenator on the level of surgical table. Two inlet jets for blood (inner diameter up to 6 mm) of each of the reservoirs were connected with each other and supply venous trunk (inner diameter up to 10 mm). Outlet jets are connected with each other and the trunk leading to the oxigenator (inner diameter up to 6 mm). In each of the reservoirs the jets of the air outlets are connected with the pneumatic receivers of positive and negative pressures with special external valves controlled electronically, included into the pump unit, provided filling of one of the reservoirs, creating negative pressure in it, if the outlet trunk is closed and simultaneously, from the other reservoir there was provided pressurizing, supplying positive pressure with the closed inlet trunk.

In the trunk connecting the outlet of oxigenator with the inlet of arterial filter there was placed the external pulsating unit also included into the pump unit. Electronically controlled pulsating unit, pressing the trunk to certain level, allowed changing of the frequency of contractions, steepness of growth and fall of pressure (dp/dt) and duration of systole and diastole. In the control system there is also included the unit for control of the level of liquid in the reservoirs and switch of valves, regulating sequence of functions of letdown and pressurizing. For use of the perfusion system on small laboratory animals only the volume of the pump reservoirs and diameters of connecting trunks were changed. Thus, the total volume of system filling was changed.

Monitoring of the pneumatic pressure in the chambers of the reservoirs and pressure of pulsation frequency, volume of blood flow in the connecting trunks and vessels of the biological model was pro-vided by means of the electromagnetic sensors of polygraph “Mingograf-81” – Elema Shonander (Sweden) and flow meter “Nihon Kohden” (Japan). In the experiments with the animals there was also measured the temperature in the rectum and oesophagus and cardiogram was made. Acid-base condition of the blood was measured by means of gas analyzer “Astrup” – Denmark.

Stand tests were conducted with the purpose of determining of hydrodynamic capacities of the pump device and reliability of its control system. They allowed for identification of basic characteristics of the pump device and the machine as a whole. The system, assembled entirely on the vertical holder allows for maximal approach to the object of perfusion, thus significantly reducing the volume of filling.(8) In the closed regime of circulation, with 6-mm connecting trunks capacity of the machine was 8.5 l/min. Pressure on the outlet trunk was regulated within 0-300 mmHg and within the system it mainly was dependent on resistance of oxigenator and arterial filter. In the regime “Stop” levels of the liquids in the pump reservoirs was maintained unchanged and this did not require pressing of the trunks. Pump control system allowed for creation of both, laminar and pulsating flow of the liquid on the outflow trunk.

The perfusion system was tested in the acute experiments (14 experiments) on the mongrel dogs of both sexes, with up to 20 kg weights, on which, in the conditions of intravenous narcosis and sternotomy, by means of standard techniques, there was conducted cannulation of the vena cavas and aorta. The perfusion system was filled with the blood substitute (total volume of filling was 900-1000 ml of Ringer’s solution with 5000 units of heparin), in the recirculation process there were removed the bubbles of air and the system was stopped. Arterial trunk was connected from the filter to the aortal cannula and the inflow, venous trunk – to the triple connection of the venous cannulas. The parallel heart-lung bypass in the direction of blood flow was commenced in one of the pump reservoirs.

After its filling to the conditional mark (corresponding to 700 ml), flow of venous blood was directed to another reservoir and to the first one, air was supplied from the receivers under the pressure (150-200 mmHg). Thus, the blood pressing through the arterial filter into aorta was commenced. Capacity of the system was no more than 1200 ml/min. Redistribution of blood in the reservoirs, as well as providing pressure and relieve in turns in the chambers was provided automatically from the control system. We conducted simultaneous normothermal perfusion with the operating heart and natural oxygenation for the period up to 1 hour.

Further we provided full HLB, carrying out cardioplegia, clamping aorta and terminating artificial ventilation of lungs. Duration of full heart-lung bypass achieved 3 hours. Systolic pressure was maintained within 120-130 mmHg; diastolic – 70 – 80 mmHg (average pressure in the femoral artery for entire period of perfusion was no less than 75 mmHg). Volume velocity of blood flow in the arch of aorta was within 950 – 1100 ml/min and in the femoral artery – 60 – 80 ml/min.

Regarding requirements of the experimenters in this sphere(5) there was developed miniature version of the perfusion system, tested in the first experiments on 17 rats, to which it was connected by the scheme: left middle – descending aorta, with retrograde pressurizing of blood (without occlusion of ascending aorta, in the conditions of cold cardioplegia (fibrillation of the ventricles). As a result of full heart-lung bypass in 13 cases there was observed spontaneous restoration of heart operation after 30-minute perfusion. In no one of the conducted experiments hemolysis was not observed in the blood tests.

First attempts of operation in the experiments on non-traditional systems of heart-lung bypass and pulsatile perfusion showed possibility of achievement if hemodynamic characteristics identical to physiological ones. In comparison with the traditional machines the system has minimal volume of filling and does not damage blood cells. Constructive pumping system and entire perfusion system are quite simple and the control system allows achievement of hemodynamic characteristics maximally close to physiological ones. In addition, the system could be applied on the experiments on both, large and small experimental animals.