Background: EnSite Precision AutoMark Module (Abbott) refers to automated lesion creating tool. Only lesions meeting user-defined requirements are placed on the map. The amount of ablation is represented by the size and color of marking spheres. The aim of this study is to present our initial experience with AutoMark Module in AF ablation.

Results: Nine patients (mean age of 53 ± 10 years, 3 male) were included in the study with EHRA class 2b (44%) and class 3 (56%). Auto-marks were placed only when user-defined criteria were reached whereas manual points were marked subjectively. The auto-marks numbered 299 ± 82 per procedure and 5.39 ± 1.42 per RF application. Auto-marks provided good visualization of the ablation lines using the predefined criteria. AutoMark Module visualized probable gaps in the ablation line, which appeared as an area without spheres or with white spheres. That was not possible with manual marking because of its subjective nature.

Conclusion: AutoMark is better than manual marking in providing real-time visual feedback on lesion creation. Our preselected lesion parameters ensure a tool to visualize possible gaps in the ablation line.

Atrial fibrillation (AF) is the most common arrhythmia in clinical practice.(1) The landmark study by Haissaguerre et al. demonstrated that ectopic beats from the pulmonary veins (PV) often triggered AF.(2) This finding focused catheter ablation approaches on PV isolation (PVI). The introduction of electroanatomic guidance technology resulted in a paradigm shift in delivery of therapy for atrial fibrillation.(3-8) EnSite Precision AutoMark Module (Abbott) was introduced in Europe in 2016 and referred to automated lesion creating tool. Only lesions meeting user-defined requirements are placed on the map.(9) The amount of ablation is represented by the size and color of marking spheres.

Miller et al. accentuated the role of visual gaps in the ablation line during PVI.(10) According to their study, acute electrical isolation was insufficient endpoint for achieving durable PV isolation.(10) Moreover, pulmonary vein reconnection is considered to be the most important reason for atrial fibrillation recurrence.(11) Hence, it is important to find a way toward durable PVI. Manual marking is the current widespread practice for visualization of ablation lesions. However, it is subjective in nature and we hypothesized that it could not provide real-time visual feedback on possible gaps in the ablation line.

The aim of this study is to present our initial experience with AutoMark Module in AF ablation and to compare the ability of automatic and manual marking to visualize gaps in the ablation line.

The EnSite operator marked the ablation lesions manually. The power of RF applications was limited to 25 W for the posterior wall and 35 W for the anterior wall. AutoMark module was started but invisible for the operators. Ablation lesions were automatically marked in different colors depending on absolute impedance drop and RF duration as follows: white (<6 Ω; < 5 s); yellow (6-8 Ω; 5-15 s); orange (8-10 Ω; 15-30 s); red (>10 Ω; >30 s). AutoMark colors were determined by force-time integral (FTI) when TactiCath Quartz catheter was used as follows: white (<50 g); yellow (50-150 g); orange (150-300 g); red (>300 g). An auto-mark was created when catheter remained in a stable location for more than 3 s, with a minimum distance between spheres (center-to-center) of 3 mm. We confirmed entrance and exit block in all PV by pacing from coronary sinus and each PV at the end of the procedure. Procedures were exported and analyzed offline. Auto-marks were compared with manually placed spheres.

Anticoagulation and antiarrhythmic drugs were continued until the third month after the procedure. Anticoagulation was continued afterwards according to the CHA2DS2-VASc stroke risk.(12) 24-hour Holter ECG monitoring was performed regularly until the end of the follow-up. Repeat ablation procedure was advised in case of recurrence.

Statistical analysis was performed with SPSS Statistics 21 (IBM Corporation, Armonk, NY). Descriptive statistical methods (mean, standard deviation) were used for the definition of continuous variables. Fisher’s exact test was used in the analysis of the associations among categorical variables. P-values of <0.05 were considered as significant.

Nine patients (mean age of 53.8 ± 10.8 years, 3 male) were included in the study. Baseline clinical characteristics are indicated in Table 1. All patients had drug-resistant or drug-intolerant symptomatic paroxysmal AF. Each one of the PV was successfully, electrically isolated with entrance and exit block at the end of the procedure. Procedural data are specified in Table 2. Auto-marks appeared only when user-defined criteria were fulfilled. They provided good visualization of the ablation lines (Fig. 1, 2, 3). Furthermore, AutoMark Module visualized probable gaps in the ablation line which appeared as an area without spheres or with white spheres (Fig. 1, 2, 3, 4). That was not possible with manual marking due to its subjective nature (Fig. 5). Gaps in the ablation line were observed in 7 patients with AutoMark versus one patient with manual marking (p=0.026). 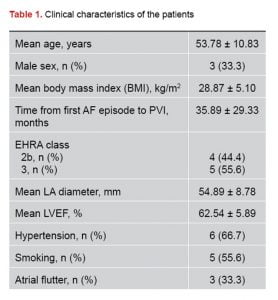 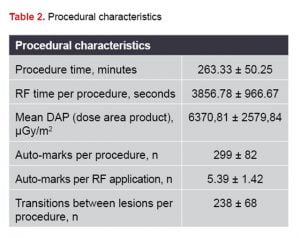 At the end of the follow-up (mean 10 ± 4.7 months), 2 patients (22.2%) continued the antiarrhythmic drugs and 5 patients (55.6%) received an oral anticoagulant. Recurrence of AF, atrial flutter or tachycardia was documented in 2 patients. Consequently, 77.8% of the ­patients demonstrated freedom from atrial tachyarrhythmia. Using the AutoMark Module, we discovered that both patients with recurrences had gaps in the ablation line in more than two PV. On the contrary, gaps in more than two PV were established in only one patient without recurrence (p=0.08).

PV reconnection is considered to be the most important reason for atrial fibrillation recurrence(11,13-15) while durable PVI results in a high single-procedure arrhythmia-free survival.(16) Lesion depth and ­contiguity are considered to be important determinants of durable PVI in ablation which is guided by contact-force measurement.(17) FTI more than 400g correlated with a 95% probability of durable PV isolation at 3 months after the index procedure.(18) However, calculation of FTI might be inaccurate because of inadequate calibration, the angle of incidence or contact with neighboring electrodes.(19) Furthermore, a previous study revealed that lesions with FTI value of 300 g at 35 W had three times greater volume than that of lesions created with 20 W and the same FTI.(20) Therefore, FTI is not so good predictor of durable lesion formation as was previously thought.(21)

The depth of RF lesions is also dependent on the delivered power and duration of the RF applications .(22,23) However, RF power is relatively constant during ablation. Therefore, we included RF application duration in the predefined model of ablation lesions (Fig 1). 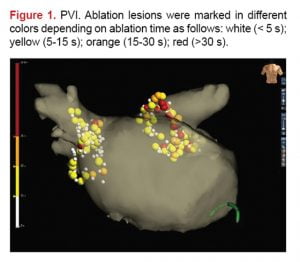 Experimental studies prove that impedance decrease is a good correlate for RF lesion volume.(22-26) Impedance decrease, which is less than 10 Ω during point-by-point PVI in humans, is associated with areas of late PV reconnection.(27) Moreover, El Haddad et al. showed that obtaining a minimal impedance decrease of >10 Ω is likely to result in a durable lesion.(17) We have used AutoMark to tag absolute impedance drop with white (<6 Ω), yellow (6-8 Ω), orange (8-10 Ω) and red (>10 Ω) spheres, whereas AutoMark provided good visualization of the ablation lines (Fig.2, 4). 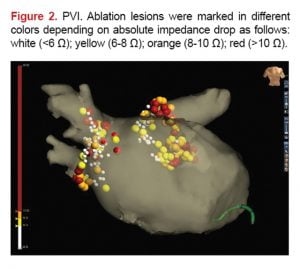 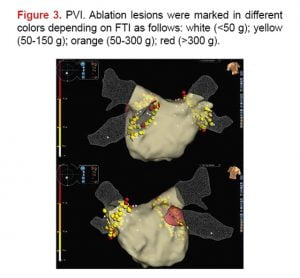 According to previous studies, closing the visual gap is essential for acute durable PVI.(10) We observed visual gaps in the ablation line in 7 patients with auto-marking and the preselected parameters. On the contrary, only one patient demonstrated gap in the ablation line with manual marking (p=0.026). The endpoint of acute electrical isolation of PV can be achieved despite an incomplete circumferential lesion set.(10) However, it can leave potential conduction gaps between PV and LA.(28) Miller et al. determined presence of viable and not fully ablated tissue in the visual gap area.(10) Furthermore, pre-clinical studies revealed that AF propagates through gaps as small as 1.1 mm, and these gaps can be pro-arrhythmic according to several clinical studies.(29-32) Therefore, inter-lesion distance ≥5 mm may explain acute PV reconnection.(33) However, lesions were marked manually in those studies. Our findings show that AutoMark is significantly better than manual marking in visualization of gaps in the ablation line (p=0.026). 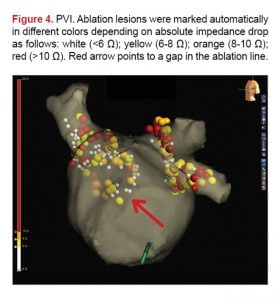 In this study, we documented recurrence of atrial tachyarrhythmia in 2 patients at the end of the follow-up (mean 10 ± 4.7 months). Both patients had gaps in the ablation line in more than two PV detected by AutoMark, whereas only one patient without recurrence had similar gaps (p=0.08). A study with more patients is needed to verify the statistical significance of that result. 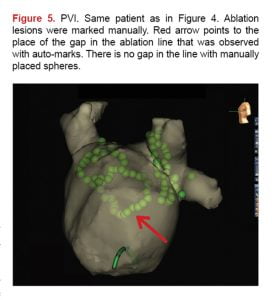 There is no single parameter which identifies a durable lesion formation. Therefore, we used a combination of preselected lesion parameters which ensured a tool to visualize possible gaps in the ablation line. However, our study failed to demonstrate that AutoMark gaps in the ablation lines determine AF recurrences. That was an initial study with a small sample size, hence more studies are required to investigate that problem.

AutoMark is better than manual marking in providing real-time visual feedback on lesion creation. Moreover, automatic marking establishes gaps in the ablation line more accurately than manual marking. Our preselected lesion parameters ensure a tool to visualize possible gaps in the ablation line. However, further studies are needed to reveal whether there is a benefit from AutoMark on the occurrence of AF recurrences during long-term follow-up.

This research received no specific grant from any funding agency in the public, commercial, or not-for-profit sectors.