Background: Ischemic heart disease is an important death cause in Brazil. The Acute Coronary Syndrome is a subset of signs and symptoms which represents an acute complication of ischemic heart disease. Many of these patients have common risk factors, including renal dysfunction. The analysis of the importance of this commitment in the event of outcomes is still little explored in our midst.

Objective: To study the associantion betweent renal dysfunction and the occurrence of deaths in patients with Acute Coronary Syndrome, Methods: This is a analytical study, with patients admitted to the Coronary Care Unit of a Tertiary Hospital (Salvador / BA) diagnosed with acute coronary syndrome, in the period from 2011 to 2014. The patients were divided into three groups according to renal function and two groups according to clinical diagnosis.

Results: We identified six hundred seventy-four (n = 674) individuals. Mean age was 69.6 ± 12.4 years and 50.7% (n = 342) were male. Regarding the clinical diagnosis, 49% of patients (n = 331) were diagnosed with Unstable Angina and 50.9% (n = 342) with Acute Myocardial Infarction. The average value of creatinine clearence rate was 63.2 ± 29.3 ml / min (p = 0.001). Conclusion: The severe renal dysfucntion is an important prognostic factor for development of coronary artery disease and was associated with bad prognosis of patients with ACS. The variables DM, hypertension and dyslipidemia were often associated in theses patients.

Recently, cardiovascular diseases (CVD) are an important cause of mortality and disability in the World[1], in Brazil[2, 3] and Bahia.[4] Ischemic heart disease can develop multiple outcome.[5] It can remain asymptomatic for a lifetime, can evolve for an Acute Coronary Syndrome (ACS), a chronic disease or sudden death.[2, 6]

Epidemiological data demonstrated that SCA is an endemic disease.[7] It is estimated that about 83 million adult United States population develop at least one type of cardiovascular disease.[5] Of this total, about 15 million had coronary heart disease and in 2010 and of the total number of deaths recorded, 32% were cases related to cardiovascular disease.[5,8] On Brazilian scene, the figures reveal that the situations are similar. The prevalence of coronary artery disease in Brazil adult population is around 5 to 8% and about 32% of the population died due to cardiovascular problems.[4]

Kidney disease (KD) is a major systemic condition and constitutes common final pathway of many different diseases of the kidney and urinary tract,[9] characterized by the renal failure function.[10] Based on creatinine clearance values (CrCl), renal function can be divided into mild impairment (CrCl> 60 mL / dL), moderate (CrCl 30-60 ml / dL) and severe (CrCl <30 mL / dL), with a subgroup represented dialytic patients dialíticos.[10] Kidney disease is associated with risk factors that include: advanced age, male gender, hypertension , diabetes mellitus (DM), smoking and family history of CVD,[5] which are similar to the factors risk for ACS.[1] Thus it is not unusual that there is an association between ACS and kidney disease. The KD is associated with increasing mortality, since patients with mild to moderate degrees of renal impairment is showing worse prognosis of ACS when compared to those with preserver normal renal function.[11]

ACS is responsible for high costs in health care and the implementation of public and private politics that reduce these numbers depend on the understanding of studies to accurately reflect the strategy diagnoses and therapeutic.[12] Knowledge about interventions that promote reduction in the incidence of CVD is a constant challenge.[13] Risk factors for ischemic heart disease are not properly documented in Brazil[14] and analysis of the clinical outcome of these patients is varied and there are few studies done on the subject.

Consecutive patients admitted to the Emergency Ward and thereafter admitted to the Coronary Care Unit of the Hospital Português (Salvador, Bahia, Brazil) with a diagnosisof unstable angina (UA) or acute myocardial infarction (AMI) with ST segment elevation (SSE) and without SSE, from January 2011 to December 2014, participated in the study. We included those patients with chest pain or equivalent ischemic condition within 48 hours of admission and at least one of the three following characteristics: 1) ischemic electrocardiographic changes (T-wave inversion or ST segment depression), 2) serum markers of myocardial necrosis above the upper limit of normal, and/or 3) documentation of prior coronary artery disease.

This study was approved by the Ethics and Research Committee of Portuguese Hospital (nº1074369). Patients information were recorded in electronic medical records. The identification information had been saved on the digital platform with the code numbers guaranteeing the anonymity of these.

The baseline characteristics of the patients were summarized in four mutually exclusive groups of renal function and the types of diagnosis. For descriptive analysis, quantitative variables were represented by mean and standard deviation, where their distribution were normal, and represented by medians and interquartile ranges when the distribution was not normal. The definition of normality was made by graphical analysis and Shapiro-Wilk test. Categorical variables were represented by frequencies and percentages. Inclusion of variables have been carefully chosen, taking into account the number of monitoring events, to ensure parsimony of the final models. Statistical analysis was performed using the chi-square test, Test T student and Mann-Whitney test.

In order to identify which factors are associated with the combined events, we used the model of logistic regression. The variables with p <0.10 were included in the model. Those that remained significant (p <0.05) were considered independent for the occurrence of the outcome in question. Any p values <0.05 were considered statistically significant. Data were aggregated using the Statistical IBM software package for Social Sciences (SPSS ®, Chicago, IL, USA), version 20.0, and presented in numbers and informative graphics.

Among the total sample, 3% (n = 20) died during follow-up in the CCU. These subjects had mostly age (80.2 ± 9.3; p <0.001) and showed the lowest creatinine clearance values (41.8 ± 26.0, p <0.005). The most common diagnosis in this population was AMI without ST elevation followed by myocardial infarction with ST elevation. Hypertension and DM showed, respectively, 75% and 45% (p <0.05) among these patients. Demographic and clinical characteristics of patients are shown in Table 1. 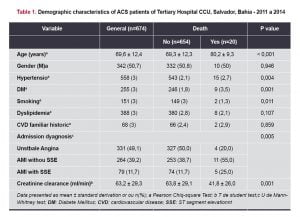 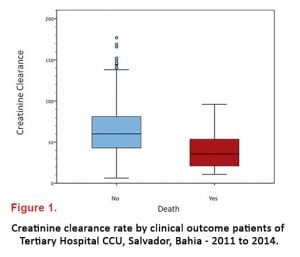 Independent predictors analysis of outcome occurring combined, the variables hypertension, diabetes mellitus, smoking and the degrees of renal function composed of losgistic regression model. The variables were selected for present value of P <0.10 or clinical relevance well documented. Logistic regression analysis identified that the clearance rate of creatinine is a significant independent predictor of combined outcomes (OR: 3.44; 95% CI: 1.827 to 6.493; p <0.001) Table 2.

Renal dysfunction (RD) and cardiovascular disease are strongly associated and currently the RD is being considered important risk factor for ACS (15). Kidney disease, as well as ACS are commonly associated with factors such as age, sex and other clinical conditions, and lifestyle habits. One should not, therefore, fail to consider the influence of these clinical conditions in the outcome of these patients.

Corroborating previous studies[2, 6] the prevalence of age was observed in the total sample, averaging 69.6 years (p <0.001). The prevalence between the sexes was not significant (p = 0.946). This finding goes against previous research findings as in Rio de Janeiro[3] and Porto Alegre[2] in which highlight the prevalence of males in their results. The clinical diagnosis was observed prevalence of AMI (p = 0.005) and between it the most common, regardless of evolution, was AMI without SSE, similar to that found in a study conducted in Brazil southern,[2] but differs from study conducted in cardiac emergency, in which achieved a 60% prevalence of patients with UI.[16]

In this study, the RD was considered a factor regardless of the outcome of patients, but moderate and severe disorders were associated with worse prognosis (p = 0.001). The values documented creatinine clearances revealed that the lowest rates were among patients who progressed to death. Thus, this study complements the findings of previous studies that have shown that severe RD is an independent predictor of cardiovascular events,[15, 17] suggesting increased RD frequency in morbidity and mortality of patients with ACS[15,17,18,25] and therefore, patients with renal impairment severe usually have worse prognosis.[19] Patients who progressed to death had increased kidney damage, among themselves, and between the control sample was greater frequency of normal kidney function.

It is believed that some factors that compromise renal function may contribute to adverse outcomes in ACS patients. Among these factors are included insulin resistance, extracellular changes, oxidative stress and endotelial dysfunction,[18] so the RD is directly or indirectly involved in the development of hypertension, dyslipidemia, and neuroendocrine disorders important contributors to the advancement of acute coronary disease.[15] Analysis data showed that among the risk factors highlighted the massive presence of hypertension, which affected about 90% (p = 0.004) of the sample, being prevalent in the two study groups. Then, it was noted that dyslipidemia was also quite common such. DM, however, was present in most patients who died and a little less in the control group. Smoking was not so frequent in the study because most of the individuals denied the habit, but, however, the rate was similar in both groups. Another clinical condition was researched family history of CVD who remained not significant because the vast majority of patients were not aware of this information.

In earlier descriptive and retrospective studies, in Brazil south[1] such as in Bahia,[22] DM was present in about 40% of patients. In the present study, DM was recorded at 37.8% (p = 0.001) of patients going against the expectations.

In this study, smoking was found in 22.4% of patients (p = 0.011), since about 74% of patients denied the use of tobacco. This result was not expected since previous studies, such as Interheart it demonstrated that smoking, with a consumption of one to five cigarettes / day increases the risk of AMI in 40%,[23] similar to the study data made in Porto Alegre.[1]

The limitations on the present study relate to observational and retrospective nature of research with interpretation of clinical data. In addition, this study was a single center; so your results may not be fully extended to other populations.

It is essential to understand that many patients with ACS are also carriers of RD and the association of these two conditions can increase the mortality rate. Moreover, despite universal issues it is possible that regional variations related to demographic conditions, can influence differently, so varying from place to place. Thus, the analysis of the importance of complications in patients with ACS, allows investigation and treatment strategies are applied correctly.