Effectiveness of Off Pump CABG in impaired left ventricular function

Keywords: No Keywords
Print
PDF - Effectiveness of Off Pump CABG in impaired left ventricular function
Abstract
Full Text
References
Introduction: In most of the cardiac centers, the off-pump coronary artery bypass (OPCAB) surgery is an accepted mode of revascularization. The surgery without cardiopulmonary bypass has obvious advantages in high-risk patients. Severe left ventricular (LV) dysfunction is a known independent factor of operative mortality in patients with coronary artery bypass grafting (CABG) surgery.(1-2) the technique of off-pump (OPCAB) has both theoretical and practical advantages. Critical patients with impaired left ventricular (LV) function who need coronary artery bypass grafting (CABG) have an augmented risk of Perioperative mortality and morbidity.(3,4,5) The aim of this single-center retrospective study was to compare early and short-term outcomes after conventional (CCAB) in patients and off-pump beating heart coronary artery bypass grafting (OPCAB) in patients have ejection fraction (EF) equal to or less than 35%., with regards to intensive care unit (ICU) stay, hospital course, the use of intra-aortic balloon pump support, the need of inotropic support, blood loss and renal function deterioration.

Preoperative assessment and data collection, all data according to the legal Customs and traditions of Saudi Arabia with granted informed consent were collected retrospectively, patients demographics data, risk factors, operative information and postoperative outcome data from our database system at Prince Sultan Cardiac Center – Al Hofuf– KSA which is maintained in our center to document all cardiac surgical activity.150 patients with impaired LV function based on a recorded ejection fraction (EF) equal to or less than 35% subjected to isolated CABG between September 2010 to July 2013 were collected and statistically analyzed. 60 (40%) patients underwent CABG with off-pump beating technique (group1) and 90 (60%) patients with the conventional technique (group2). For each group, the clinical, angiographic characteristics, the operative and early and short-term outcome data were compared. We exclude Patients subjected to combined surgery, redo surgery, emergency procedures, big heart, a left ventricular aneurysm or aortic surgery. The off-pump beating and conventional surgery were on the basis of the preference of the surgeons carrying out the operations. Identification of impaired LV function was based on either the preoperative echocardiography or thallium-201 myocardial scintigraphy that were performed to measure the left ventricular function and to assess myocardial viability. This viability study was done when indicated in some patients according to their clinical, echocardiography and coronary LV angiography data. Euro SCORE was comparable in terms of surgical risk stratification. Outcome measures for this study included ICU and hospital stay, postoperative complications including bleeding, arrhythmias, and renal complications. Duration of inotropic support, the length of mechanical ventilation, hospital mortality and length of ICU and hospital stay were recorded.

Hospital mortality was defined as death after the procedure before patient’s discharge regardless of the duration of hospitalization. Patients who died after discharge from hospital but within 30 days after the procedure were also considered as hospital mortality. Postoperative blood loss was defined as total chest tube drainage. Respiratory failure was defined as prolonged ventilator therapy (>72 hours) or need for re-intubation or tracheostomy. Renal complications included acute renal failure needs hemodialysis with creatinine more than 200 mmol/L. Surgical Techniques off-Pump beating (OPCAB) Coronary revascularization: All patients were anesthetized with the same standard manner either OPCAB or Conventional. All patients were hemodynamically monitored by both radial and femoral arterial lines for systemic pressures and Swan- Ganz a catheter for pulmonary artery pressure. Patient required 5micrograms/ kg/min of Dopamine infusion to support the heart during the procedure, which was discontinued on completion of graft placements.

The median sternotomy is the method of approach for all surgical procedures. Standard technique was used for harvesting of left internal mammary artery (LIMA) and Saphenous vein. Cell saver was used during these procedures. By using 3mg/kg Heparin to achieve activated clotting time more than 350seconds. It should repeat each 20-minutes the activated clotting time to check this. Complete revascularization was the goal in all cases and we performed bypass grafting to all.

Stabilization of the heart to achieve the target coronary artery by Octopus (Medtronic Inc, USA). A humidified carbon dioxide blower/mister (Medtronic Inc, USA) was used to clarify the anastomotic site while constructing the distal anastomosis. Posterior and lateral target coronary arteries were accessed by deep pericardial traction sutures and/or with the use of Starfish cardiac positioner (Medtronic Inc., USA). A mean systemic arterial pressure was maintained around 65-70 mm of Hg throughout the procedure. An intra-coronary shunt was used whenever it was possible while constructing the coronary anastomosis for all the vessels.

The strategies of coronary artery grafting were to graft left internal thoracic artery to left anterior descending artery first, followed by either obtuse marginal arteries or right coronary artery whichever was stenosis is critical. The target vessel was occluded proximally using a 4-0 polytetrafluoroethylene suture passed twice beneath the artery to prevent direct contact between the suture and the anterior coronary wall. Techniques of conventional CABG: After full systemic heparinization to achieve activated clotting time level of at least 400 seconds, CPB was instituted in a usual manner. After aortic cross-clamp, myocardial protection is achieved by blood Cardioplegia in an antegrade fashion combined with systemic hypothermia 28-30°C. Cardioplegia was repeated each 20 minutes and after every distal anastomosis. Distal anastomoses were completed first, then the proximal anastomoses using the single aortic cross-clamp or partial clamp. The release of Aortic cross-clamp, the weaning of CPB, and reversal of heparin was done in a standard manner. The intra-aortic balloon pump was inserted in patients with hemodynamic instability.

Between September 2010 to July 2013,150 patients with impaired LV function based on a recorded ejection fraction (EF) equal to or less than 35% subjected to isolated CABG were collected and statistically analyzed. 60 (40%) patients underwent CABG with off-pump beating technique (group1) and 90 (60%) patients with the conventional technique (group2). The mean Euro SCORE for OPCAB patients was 3.45 ± 1.8 and for on-pump patients was 3.30 ± 1.4 (p=0.36) and both groups were comparable in terms of surgical risk stratification. 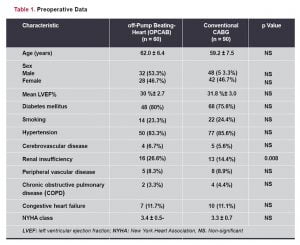 The indication of intra-aortic balloon pump was hemodynamic instability as high pulmonary artery pressure, or hypotension and usage of moderate or higher doses of inotropic support was also higher in the conventional group (p<0.005).There is significance differences between the two group concerning ,the hours of ventilation time was 7.2±6.3 group1vs 10.1±7.2 group2 (p<0.05). There is more deterioration of renal function in group 2 patient (renal failure was 7 patients (7.8%) in group 2 vs 1patient (1.7%) (p<0.02). Group 2 patients had longer intensive care unit stay and hospital stay with significant differences than group 1. There is no significant differences regarding the in hospital mortality between the two groups.

In the short-term follow up period (6 months after the date of surgery), the mean EF% had improvement with statistical significance from 30%±2.7 to 40.0% ± 2.0 in group 1 and from 31.8%±3.0 to 39% ± 2.3 in group 2. The functional class improved coincide with improvement of EF%. The mean NYHA class had significant improvement related to the preoperative period in both groups, in group 1 from 3.4 ± 0.5 to 1.9±.7, vs 3.3± 0.7 to 2.0±.2 in the other group, but in all the postoperative short-term follow up period, there is no statistically significant difference between the two groups.

The definition of severe left ventricular dysfunction definition is not clear. The choice of ejection fraction < 35% as others defined the severe LV dysfunction although other several authors defined severe LV dysfunction as ejection fraction (EF) <30%(1,6)The number of patients with end stage ischemic cardiomyopathy increased, that leads to increase the incidence to operate on patients have severely impaired left ventricular function for coronary revascularization. The challenge is the management of patient impaired LV function due to ischemic heart disease. Coronary artery bypass grafting has been considered as a high risk surgical procedure.(2)

In the past decade due to good outcome the OPCAB techniques, it was becoming popular.(7,8,9-10) It is noticed by many non-randomized sophisticated statistical methods that the OPCAB technique has lower incidence of re-exploration for bleeding, stroke, prolonged ventilation and acute renal failure.(11, 12) OPCAB in-hospital mortality in our study was 3.3% which was comparable to other published series (6.1%; 7%, 6.5% and 4.4%(13,14,9,15) respectively. Complete revascularization depends on the suitability of diseased coronary arteries to be graftable. To reach the targeted vessels, the heart should be elevated. For left anterior descending artery and diagonal branches need light elevation which does not affect the hemodynamics. For the obtuse marginals, posterior descending artery and posterolateral ventricular branches need more elevation of ventricle which affect the coronary blood flow especially the circumflex artery.(16)

We noticed this hemodynamic instability in patients grafted for marginal branches especially if the target area is proximal, ramus intermedius which needs many manipulations to decrease it as more deep pericardial suture and tilting the operating table in Trendelenburg position with right tilt. In four cases the insertion of Intra-aortic balloon pump support is mandatory to stabilize the hemodynamics. We noticed that there is no significant difference statistically concerning the number of grafts between the two groups (OPCAB vs CCBG) in comparison to other authors.(9, 17) In this study there is no significant difference between the two groups concerning the incidence of atrial fibrillation which is coincide with other results.(14, 15) There is significant difference statistically regarding the reduction of use of Intra-aortic balloon pump support that coincide with other authors.(13, 14, 18)

Also there is significant reduction in the ICU and hospital stay with OPCAB group that coincide with other authors.(19, 20) The pre-existing renal dysfunction get worse, in patients do CCABG (group 2) with impaired left ventricular function (p <0.02). It is proved that left ventricular end systolic volume index (LVESVI) is an important predictor for short and long term functional improvement.(21) The LVESVI of 100 ml/m2 or less, is associated with favorable outcome and recovery of the LV., but the EF% value has no statistically significant predictor of long-term outcome, so a low EF did not differentiate between hibernation and infarction as the cause of poor contractile function. During short-term follow-up in this study, LVEF in both groups was improved and there is improvement in functional class correlated with improvement of EF%. But in all the postoperative short-term follow up period, there is no statistically significant difference between the two groups.

Limitations and recommendations of study:

Off pump CABG can be performed safely and effectively in critical patients with impaired left ventricular (LV) function. The postoperative morbidity and morta-lity was less in Off-pump group compared to conventional technique with more renal preservation in cases of impaired renal function.