Attention Please! The hosting service for http://www.ejcvsmed.org will be suspended in a short time!
Vol.5 Issue.4 · October-December 2017Page: 95-98 Letter to the Editor 4,442x viewed
Previous Article

I have read the well constructed review manuscript from the Authors Zeynep Eyileten, Adnan Uysalel with the title ‘Isolated ventricular septal defect in infants‘ published EJCM 2017;5(2):27-33 with great pleasure. There are two main classifications desribed by Richard Van Praagh and by Robert Anderson. I want to give information about the main differences between the classifications of these two cardiac morphologs.

Defects between the ventricles are the commonest congenital cardiac malformations. As yet, however, there is no consensus as to how they can best be described and categorized. Although most of the cardiac structure have been extensively addressed, significant gaps continue to exist between the descriptions provided by morphologists and by those working in the clinical setting such as the cardiologists and cardiac surgeons.

Although there are several definitions depending on the localisation and the diamention of the VSD’s the two modern anatomical descriptions were made by Richard Van Praagh and Robert Anderson.

Muscular VSDs are localised within the anterior, mid-ventricular, posterior or apical portion of the ventricular septum.

Conoventricular VSD occurs due to hypoplastic or malaligned conal septumand is bordered by conal septum and the septal band. If thre is membranous septal involvement, it is descibed as paramembranous or juxtamembranous. According to Van Praagh as ‘peri-‘means around and the defect doesn’t surround the membranous septum the name perimembranous is incorrect.

Conal VSD is located within the conal septum. Aortic and pulmonary valves are at the superior aspect
of the defect. The remainder of the ventricular septal defect rim is bordered by the conal septal muscle.

Doubly Committed Juxtaarterial defect is bordered by both arterial valves,and there is fibrous continuity of the leaflets of each of the arterial valves. 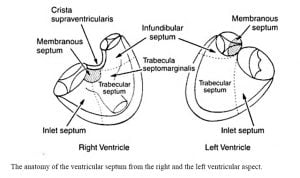 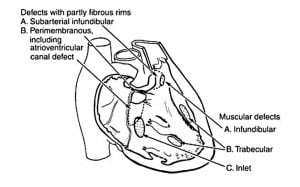 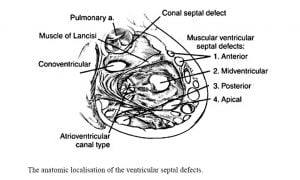