Transcatheter successful palliation of a newborn with ductal-dependent pulmonary circulation

Conventional management of neonates with ductal-dependent pulmonary flow entails maintaining ductal patency using prostaglandin E1 infusion followed by surgical palliation with BlalockTaussig shunt (B-T shunt). Nowadays, percutaneous transcatheter placement of a stent to maintain ductal patency has been used as an alternative method to provide a source of pulmonary blood flow.[1,2] The potential advantages of ductal stenting include reduced procedure-related risks and improved distribution of pulmonary artery blood flow.[3] Ductal stenting could be used as a bridge toward corrective surgery in neonates.[4]
.

After that a second coronary stent (4×15 mm) was implanted to cover most of the duct (Figure 3). The final oxygen saturation was 90% after two stent implantation. After cessation of prostaglandin infusion the patient’ oxygen saturation gradually decreased up to the 55%. Second cardiac catheterization showed critically stenosis in aortic end of ductus (Figure 4).

A third coronary stent (4×15 mm) was placed to cover the aortic side entirely (Figure 5). The oxygen saturation was increased to 85% after third stent implantation. The patient was discharged with %85 oxygen saturation in the following days. During follow-up periods of to three months he had no problem clinically, weight gain and %88 percutaneous oxygen saturation. 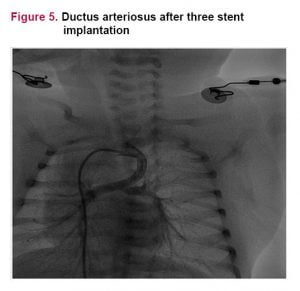 Ductal stenting a reliable and more physiologic alternative to surgical systemic to pulmonary shunt in neonates.  But the lack of stent coverage of the entire ductus (especially in long and tortuous duct) results duct constriction and cyanosis of the patient and causes re-intervention in most cases. It is well known that passing a catheter through the stent is technically very difficult and increases the risk of thrombosis and hemodynamic destabilization when compared with the primary intervention. Therefore stent long must be enough to cover entire ductus. But in some cases a small segment of the duct may be left uncovered and necessitating use of second or third stent. The full-length stenting of the duct without leaving any ductal tissue is important.