Abstract: Insertion of hemodialysis catheter is widely performed for patients with chronic renal failure. Right atrial thrombus formation is one of the serious and rare complications of indwelling catheter. Herein we a present a chronic renal failure patient who had an indwelling catheter induced right atrial thrombus. Thrombectomy was performed on cardiopulmonary bypass and the postoperative course was uneventful.

Due to increased incidence of renal failure required hemodialysis; placement of hemodialysis catheters is widely performed for use in both the hospital and the outpatient setting. There are many conditions which may complicate this type of vascular access such as infection, hemorrhage, thrombus formation and stenosis of the vein in which the catheter is inserted. We a present a chronic renal failure patient who had an indwelling catheter induced right atrial thrombus. Thrombectomy was performed on cardiopulmonary bypass and the postoperative course was uneventful.

A 48 year-old female patient came to our clinic suffering from palpitation. She had a chronic renal failure so a hemodialysis catheter was inserted into the right internal jugular vein 3 months ago in another hospital. She had no fever, blood pressure was 120/80 mmhg and heart rate 85 beats/min. The indwelling catheter was inserted into the right internal jugular vein. There was no pathological sign on the physical examination. Echocardiographic imaging revealed a 4.2 x 3.5cm mass adherent to the right atrial wall. 2 degree tricuspid regurgitation and a 70 mmhg systolic pulmonary artery pressure were observed. No sign of pulmonary thromboembolism was observed on the thorax tomography scanning. Right atrial thrombectomy was performed on cardiopulmonary bypass. The tricuspid valve was intact. The postoperative course was uneventful.

The formation of a thrombus around the intracardiac end of an indwelling catheter is a rare condition. On opening the right atrium we found the indwelling catheter around which a thrombus was formed. The thrombus was fragile, white-pinkish, organized, cauliflower shape and lobulated so we mixed it with a myxoma (Figure.1). The end of the catheter was adhered to the wall of the right atrium, so we believe that an endothelial damage induced by trauma predisposed to platelet aggregation and thrombus formation. The spacemen was cultured and no micro-organism was colonized. Indwelling catheter induced right atrial thromboses is difficult to detect on the basis of clinical signs. 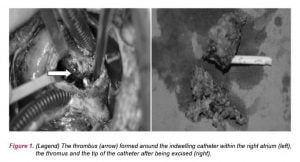 A prospective study of 32 consecutive autopsies of patients who died with balloon-tipped, flow- directed right heart catheter in place Alfred and associates found that 29% of 55 patients who died within one month of catheterization had right sided endocardiac lesions (thrombus or hemorrhage) and 4 of these had infective endocarditis. Chastre et al found internal jugular vein thrombosis by venography or at post-mortem examination in 22 of 33 (66%) consecutive patients immediately following removal of thier right heart.(1) Right atrial Thrombectomy has been reported to be associated with a lower mortality compared with conservative management with anticoagulation and antibiotics; however, this may reflect selection bias, with more stable patients undergoing surgery.(2) It has been suggested that if the thrombus is small (<2 cm), anticoagulation is tried for 6 months followed by a repeat echo and catheter removal.

In the presence of bacteraemia, the catheter would be removed first followed by anticoagulation. If the thrombus is larger than 2 cm, especially in the presence of infection, urgent thrombectomy together with antibiotics and anticoagulation should be considered.(2) In this case the thrombus was about 4×4 cm and fortunately she did not suffer from any fever or bacteraemia.

Administration of anticoagulant into this patient could lead to pulmonary thromboembolism and get the situation deteriorated. We suggest performance of echcardiographic scanning on patients requiring long period indwelling catheter on the central veins and right side of the heart for early diagnosis and intervention of any intracardiac thrombus.