Infective endocarditis is a serious but relatively rare infection that is associated with high morbidity and mortality rates. Aspergillus endocarditis is an uncommon entity and invasive cardiac aspergillosis is a severe and extremely life threatening disease. Prolonged use of intravascular catheters, anatomical cardiac conditions, exposure to multiple broad-spectrum antibiotics, intravenous drug abuse, and previous history of surgery are the most common risk factors of fungemia and fungal endocarditis. Diagnosis is based on the isolation of etiologic agents from cardiac and blood samples or specimens from other sterile sites or positive histopathological findings of pathologic specimens. Echocardiographic findings of endocardial involvement can lead to diagnosis. Echocardiographically, differencial diagnosis of tumor extensions, especially myxoma, atipically located bacterial vegetations, thrombus or fungal masses is very difficult as thrombi and infective verrus can mimic myxomas. Treatment of fungal endocarditis only with antifungal agents is generally unsuccessful and  additional surgical intervention is usually required. In this case report we present an fungal endocarditis caused by Aspergillus species that mimicked an atrial myxoma echocardiographically in a patient who had a history of treatment with wide spectrum antibiotics for a long time. We suggest that patients who had broad spectrum antibiotic treatment for a long time should be scanned for fungal infections and if intracardiac mass is determined, fungal endocarditis should be considered in differential diagnosis.

Myxomas are most common type of primary cardiac tumors and may be seen at any age but rarely in childhood period. Approximately 12.7% of all myxomas originate from right atrium.[4] We present a case with fungal endocarditis which mimics an atrial mixoma in echocardiographic examination.

A 2 months and 10 days old male patient was referred to our hospital because of heart murmur. He was born 1360 gr with vaginal delivery at 26 weeks gestational age. He was treated with broad spectrum antibiotics in another medical center for two months. No additional information about central venous catheterization could be obtained. In physical examination at admission, he had growth retardation (weight 2000 gr, < 3%; height 42 cm, <3%) and 3/6 degree systolic ejection murmur which was best heard in left middle side of sternum. Hemogram test revealed anemia, leucocytosis and thrombocytopenia. Biochemical laboratory tests were all in normal ranges. C- reactive protein was 90.7 mg/dL. In echocardiographic evaluation an atrial septal defect and a 17×8.2 mm sized mass originating from right side of atrial septum and extanding to right ventricular cavity through tricuspit valve, which was considered to be a thrombus, vegetation or right atrial mixoma, was determined (Figures 1 and 2).

Antibotic treatment was arranged and antifungal treatment was initiated in consultation with pediatric infection department. Blood samples for culture test was obtained. Surgical treatment was considered. A 1x1cm sized mass was excised from right side inferior vena cava region of interatrial septum with right atriotomy. In patologic examination of this mass, a group of fungal hyphae showing 45 degrees angulations was discovered and diagnosed as aspergilloma histologically (Figure 3). The patient deceased because of early surgical complications in the first day of surgery. 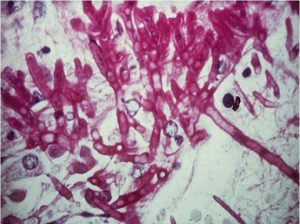 Invasive aspergillosis (IA) has a wide spectrum of clinical presentations and is associated with high mortality rates and has a wide spectrum of clinical presentations. Clinical manifestations include, but not limited, central nervous system, catheter ascociated, eye, cutaneus, pulmonary, renal, gastrointestinal aspergillosis and osteomyelitis, endocarditis, pericarditis, arthtritis caused by Aspergillus species.[5] Infective endocarditis (IE) is a serious but relatively rare infection that is associated with a high morbidity and mortality rates and predominated by causal agents that are bacterial in origin. Fungal endocarditis (FE) is reported less frequently than bacterial endocarditis in both adults and children, with an incidence in children of between 0 and 12% of total pediatric IEs.[6] Fungal endocarditis is a life-threatening infection with a poor prognosis, has been characterized by excessive mortality (50%) and morbidity, regardless of treatment, so early diagnosis and treatment is important.[7, 3]

Many factors, including prolonged use of intravascular catheters, anatomical cardiac conditions, exposure to multiple broad-spectrum antibiotics, intravenous drug abuse, and previous history of surgery, have been implicated as possible causes of fungemia and FE. In addition, prosthetic heart valves are the most frequent risk factor for these infections, and a few cases have been reported after heart transplantation.[7]

In pediatric patients although there are several risk factors associated with developing FE, including congenital heart defects, corrective or palliative surgery for heart defects, central indwelling venous catheter and other lines, parenteral hyperalimentation, exposure to multiple broad-spectrum antibiotics, chronic immunosuppression, premature infant with a low birth weight, candidemia in the neonate, bone marrow or lung trans plantation, rheumatic heart disease, leukemia; there are two main risk groups[1] the premature neonate, in whom the primary factors are due to insertion of central venous catheters, total parenteral nutrition, and prolonged exposure to broad-spectrum antibiotics[2] and children with congenital heart defects in whom palliative or corrective surgery using vascular patches and grafts is a risk factor.[6]

Our patient was in the first group, as he was prematüre and received wide spectrum antibiotics for a along time. Unfortunately we could not obtain information about usage of intravascular catheter.

The diagnosis of endocarditis and particularly FE in children is difficult, because these children are often extremely ill and the signs of IE may not be clear.[6] Patients with Aspergillus endocarditis may present with fever, multiple embolic strokes, valve abnormalities, and arrhythmias.[8] But, as in other fungal infections, clinical signs are often nonspecific, so the diagnosis of FE is still challenging. Diagnosis is based on the isolation of etiologic agents from cardiac and blood samples or specimens from other sterile sites or positive histopathological findings of pathologic specimens.[7]

It is a fact that, it is difficult to grow fungi, particularly filamentous fungi, in automated blood culture systems.[6] Conventional direct microscopy, histopathology, and culture methods are the only available techniques in most centers to diagnose invasive fungal infections due to lack of adequate laboratory techniques like galactomannan or beta-glucan tests assay which can be useful for detection of fungal infections.[8, 7] However, echocardiographic evidence of endocardial involvement can throw suspicion on endocarditis and lead to diagnosis.[9] Transthoracic and transesophageal echocardiography has been shown to be useful in diagnosing fungal infections of the heart and sensitivity of these methods are quite similar, 88.9% and 92%, respectively.

There are several cases reported with echocardiographic findings of FE.[10,11,9] In most cases, diagnosed as FE, clinical presentations are large vegetations seen in echocardiography and the absence of positive blood cultures for typical bacterial agents.[5] In our case, an evident mass in right atrium, originating from right side of atrial septum and extanding to right ventricular cavity through tricuspit valve was detected in transthoracic echocardiography. Because of the right atrial origin and existance in atrial cavity, the mass looked like an atrial myxoma. Cardiac myxomas may occur at any age, but mostly present between the ages 30 to 60, usually as sporadic cases and usually in left atrium. Familial forms have been reported and sometimes recurrences can be seen.[4,12,13] Differantial diagnosis of such an at-rial mass mostly can not be obtained completely with only echocardiographic study.

The differencial diagnosis included tumor extension, especially myxoma, atipically located bacterial vegetation, thrombus or fungal mass. Thrombi and infective verrus can mimic myxomas.[14,15] So the nature of the mass, medical history of the patient about especially for coagulation disorders and risk factors for developing infective endocarditis can be very important for management of the mass.

Treatment of pediatric FE only with antifungal agents is generally unsuccessful and surgery in addition to antifungal treatment is usually required.[6] Surgery in the management of FE aims to remove endocardial vegetations, as they are responsible for the complications and contribute to the high mortality rates especially in Aspergillus endocarditis. Also surgical removal of the mass provides material for diagnosis.

As reported in many previous studies early surgical debridement is crucial and should be followed by long-term antifungal therapy.[5] We suggested that the mass in atrial cavity seen in echocardiography may reveal an infective mass because of the risk factors of exposure to wide spectrum antibiotics for a long time and our patient’s being premature. But certain differential diagnosis was impossible only with echocardiographic findings, as blood culture tests were all negative.

So the excision of the mass surgically was necessary for treatment and diagnosis, especially for the possibility of fungal endocarditis. The mass obtained by surgical intervention was examined pathologically and was diagnosed as Aspergilloma histologically. Unfortunatelly the patient deceased because of early surgical complication, atelektasis.

Fungal endocarditis is a rare but increasing entity causing mortality and morbidity. Aspergillus endocarditis in patients who have no had cardiac surgery is extremely rare. With this case we present a patient with big cardiac mass in right atrium extanding to right ventricle in initial echocardiographic evaluation, considered as an atrial myxoma or infective mass and finally diagnosed as Aspergillus endocarditis.

The patient was treated with broad spectrum antibiotics for a long time and this is a predisposing factor for invasive fungal infections. We suggest that patients who had broad spectrum antibiotic treatment for a long time should be scanned for fungal infections and if intracardiac mass is determined, fungal endocarditis should be considered in differenial diagnosis.