A rare cause of ischemic chest pain: Congenital Ostial Atresia of the right coronary artery

Coronary Angiography: The right coronary artery originating from the proximal segment (after diagonal-1) of left anterior descending artery. There were no obstructive lesions.

On physical examination, patient has a BP of 130/70 and a heart rate of 61 bpm regular. He has no jugular venous hypertension. The point of maximal impulse is not palpable. He has a grade 3/6 systolic ejection murmur in the mitral area. He had no diastolic murmur and his lungs were clear, good peripheral pulses, and no bruits.

In large retrospective series coronary anomalies were categorized as either anomalies of origin and distribution. The prevalence of coronary anomalies in Hobbs and Yamanaka series were reported as 1.55% and 1.3%.(5) There have been  at least 37 published reports of an anomalies artery arising from the LAD, coursing anterior to right ventricular outflow tract to supply the usual RCA territory. The segment of origin from the LAD is either proximal or mid LAD. When you review the literature the frequency of this originating segment changes according to the used nomenclature. 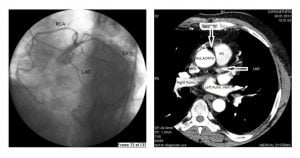 In our case the anomalous RCA was originating from the mid LAD just after the 1.st diagonal branch. There is no clear agreement of the clinical significance of an anomalous RCA from the LAD. While some authors suggest such an anomaly is usually benign and there appears to be no increased incidence of coronary atherosclerosis in such patients. On the other hand some authors suggest the opposite to be true. The presence of an additional major artery near the first diagonal may increased to the tendecy of narrowing at this point. Another possibility is the presence of ischemia without overt coronary atherosclerosis due to reduced flow velocities in the anomalous vessel. In case of a sharp angle of take-off for the anomalous vessel, flow velocities may be reduced.In our case there was no obstructive coronary artery lesion despite a an acute angle greater than 90 degrees. In conclusion, majority of anomalous right coronary arteries have their origin from the mid LAD segment as defined by CASS (Coronary Artery Surgery Study) nomenclature.(6) There is some disagreement regarding the association of this anomaly and increased coronary atherosclerosis. 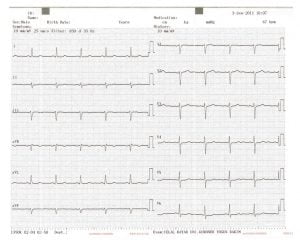