Keywords: hypertrophia · infundibular · isolated subpulmonary ring · Subvalvular pulmonary stenosis
Print
PDF - Isolated subpulmonary ring accompanied by infundibular located hypertrophia
Abstract
Full Text
References
Congenital diseases causing obstruction of the right ventricular outflow tract (RVOT) are common, but the isolated subvalvular pulmonary stenosis is a very rare condition. Its diagnosis is obscure because of difficulty of comprehension of cardiac anatomy. We report a case of a 61-year-old female who presented for increasing shortness of breath on moderate exertion. Echocardiography showed an obstruction in the RVOT during systole by a subpulmonary fibrous ring with a mean gradient of 75mmHg through the ring. Under cardiopulmonary bypass, surgical resection was successfully performed. The patient continued to do well on follow-up in the out-patient clinic, 12 months postoperative.

A 61-year-old lady was referred to our institution because of increasing dyspnea on effort NYHA III and two episodes of syncope. Her family history and past history were unremarkable. Examination revealed normal vital signs with systolic ejection murmur at the left sternal border. Her electrocardiogram showed right axis deviation with complete right bundle branch bloc. Chest X-ray revealed an important cardiomegalia without pulmonary congestion. 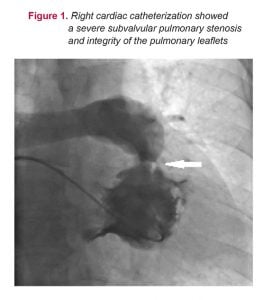 Transoesophageal echocardiography was performed preoperatively and confirmed these findings. The operation was performed through a median sternomomy. On bypass, the infunfibulum was opened longitudinally and an isolated fibrous ring 2cm below the pulmonary valve was found (Figure 2). The pulmonary valve itself was normal. A complete resection of the ring was performed. The postoperative period was uneventful and the patient continued to do well 18 months after surgery. 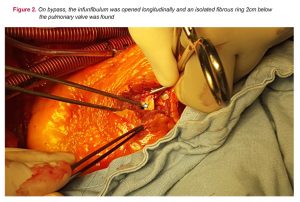 Subvalvular pulmonary stenosis commonly occurs as muscular hypertrophy associated with Tetralogy of Fallot or ventricular septal defect (VSD).[1] Membranous subpulmonary stenosis is rare, and only few cases have been reported, mostly in association with other congenital defects like pulmonary valve stenosis and VSD.[2] Isolated subpulmonary membranes are extremely rare.[3] Kou-Gi Shyu[4] reported 15 patients proved by surgery in a series of 3222 congenital heart diseases. The pathology of the fibrous ring can be related to tricuspid valve tissue or fibrous tags from the inferior vena cava or coronary sinus.[5]

The diagnosis of such a disease can be challenging, especially in adults, because of its rarity and the difficulty of assessing RVOT on TTE. Although echocardiography is the most commonly used non-invasive modality for diagnosing infundibular subpulmonary stenosis, but the detection rate by echocardiography is limited to approximately 70% of patients.[4] More imaging using 3D echocardiography and cardiac CT/magnetic resonance imaging (MRI) is highly recommended before surgical treatment.[6]

Cine MRI may be more accurate for the detection of infundibular subpulmonary stenosis, but it suffers the limitation that it only provides twodimensional visualization of the cardiac chambers and great vessels. Recently, free-breathing, whole-heart MRI has enabled three-dimensional visualization of not only the cardiac chambers and great vessels but also the coronary artery system with excellent spatial resolution.[7]

Treatment of infundibular stenosis is surgical when there is sufficient hemodynamic compromise. Surgical correction of uncomplicated isolated infundibular pulmonic stenosis under cardiopulmonary bypass is safe.[4] In the series of Shyu K-G and al,[4] there was only one death with a surgical mortality of 6,7%. All surviving patients had remained asymptomatic during the mean follow-up period of 35 months. Although patients can tolerate right ventricular hypertension for long periods of time, the optimal time for surgery is prior to the development of right ventricular failure.

We reported the case of an infundibular pulmonary stenosis associated with an isolated hypertrophy of the right ventricle in a 61-year-old lady.