Infective endocarditis (IE) is a dangerous complication of body arts in patients with and without congenital heart disease (CHD).1 Tattooing and body piercing has been becoming more popular and socially acceptable. Therefore, IE cases associated with body art continue to be reported in the literature. According to our knowledge, only three cases with CHD and IE after tattooing have been reported to date.2-4 Herein, we report a patient with ventricular septal defect (VSD) who developed IE after tattooing.

A nineteen-year-old male patient with no prior medical history started having widespread rash a week after getting tattoo to his right arm (Figure 1). He was admitted to dermatology department. Although rashes tended to disappear with prednisolone, nausea, vomiting and fever episodes began. He was referred to our clinic due to hearing of serious cardiac murmur. In his detailed medical history, he denied erythema, swelling, and discharge after tattooing and intravenous drug abuse. 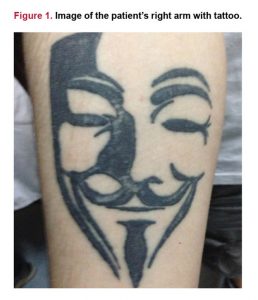 Transthoracic and transesophageal echocardiography was performed revealing mobile mass (18×6 mm) attached to right ventricular outflow track consistent with endocarditis (Figure 2a) and 10-mm ventricular septal defect with left to right shunt (Figure 2b). Qp/Qs was calculated as 1.6. Five blood cultures were collected from the patient; three samples on the first and two samples on the second day of administration to hospital. He was empirically started on cefazolin.

Infective endocarditis is still related with high mortality, despite advances in diagnostic methods, antibiotic treatment, and surgical treatment options. Lots of causative microorganisms were reported. Valvular and congenital heart diseases (CHD) are common predisposing factors for IE.5-7 Advances made in diagnosis and treatment of CHD result an increasing adult CHD population. Transient bacteriemia occurring after skin break can lead to IE particularly in individuals with CHD. Tattooing is a fashionable practice involving skin breaks up to 150 times a second. It can result superficial and deep local infections, systemic infections, allergic reactions, granulomatous reactions and other skin diseases such as eczema, psoriasis etc.8

Although IE following tattooing remains an uncommon complication, its incidence is likely to be raised with increasing adult CHD population and popularity of tattooing. Therefore education of patients and body art professionals about good hygienic practice and wound care is vital, especially in patients with CHD.

In conclusion, non-medical procedures; such as tattooing, piercing can be a risk factor for development of IE especially in patients with structural cardiac abnormalities. Consequently, more attention should be paid to aseptic techniques during the procedures in patients with CHD.