The success of endovascular treatments mostly depends on anatomical suitability. Secure neck and iliac landing zones are required to avoid of endoleaks. Common iliac artery aneurysms frequently extend to the iliac bifurcation and complicates endovascular interventions. We report a hybrid operation of an abdominal bifurcation and extremely angulated iliac artery aneurysm that aneurysmatic segments involving both internal iliac arteries (IAA). We excluded the aneurysm by an uniiliac endovascular stent graft and contralateral IIA flow was supplied by retrograde filling from femoro-femoral bypass after ligation contralateral common iliac artery via retroperitoneal approach. It is important to consider alternative treatment modalities and in cases with extreme anatomic variations, to choose a hybrid endovascular approach may be the most feasible and less invasive.

Infrarenal abdominal aortic aneurysm and iliac artery aneurysm are seen mostly together. The success of endovascular treatments mostly depends on anatomical suitability. Secure neck and iliac landing zones are required to avoid of endoleaks. Common iliac artery aneurysms (CIA) frequently extend to the iliac bifurcation and complicate the endovascular interventions. The preservation of circulation of at least one internal iliac artery (IIA) is highly recommended. 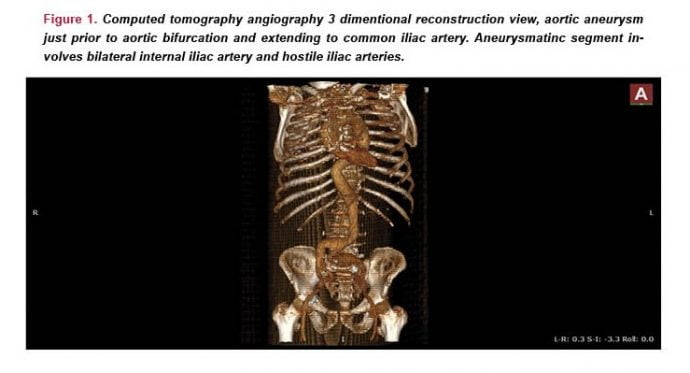 We planned hybrid approach. Both common femoral arteries were explored and snared. The aneurysm is excluded by a aorto-uniiliac endovascular stent graft system (Endurant II, MedtronicTM) that extending to the right external iliac artery (EIA) and right IIA is closed with the extension graft. A femoro-femoral bypass is made with 8 mm ringed PTFE graft to supply left lower extremity circulation (Figure 2, 3). Then we explored the left common aneurysmatic iliac artery by retroperitoneal approach with lateral oblique abdominal incision. We ligated the CIA with nylon tape to prevent the enlargement of aneurysmal sac of the left CIA. The flow to the left IIA was supplied by retrograde filling from femoro-femoral bypass. Then we observed the decreased tension of the aneurysmal sac in left CIA also the left IIA pulse was palpated. No proximal, distal, or graft junction endoleaks occurred. The patient was discharged without trouble at postoperative fourth day. 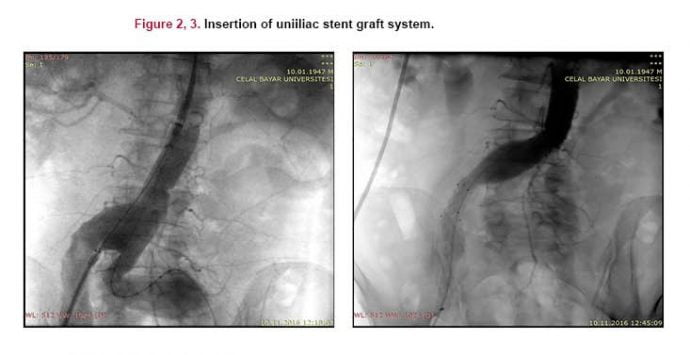 In CIA aneurysms involving the IIA, there are some ways of preserving flow to IIA; Surgical revascularization of IIA via retroperitoneal or retroinguinal insicion. An uncovered stent can extend the sealing zones, whilst maintaining complete preservation of pelvic circulation and offers support to the covered stent-graft.(4) Iliac side-branched graft (IBG) or sandwich technique can maintain pelvic perfusion. However, these adjunctive procedures increase the risk of endoleaks and they need to be applied by an experienced interventionist because of its technical difficulties.(5-8)

This case have an aortic aneurysm just prior to aortic bifurcation and extending to CIA. The case is an example to hostile iliac artery because of severe iliac  angulation and also it is complicated by aneurysmatic segment involving bilateral IIA ostium. The aneurysm is treated in combined fasion: endovascular and convential surgery. We used this approach for two reasons. First, to prevent recurrent king or stenosis of the left iliac endograft system due to extreme angulation to the right side. Secondly, to preserve the blood supply of at least one of the internal iliac artery. We think that it is important to consider alternative treatment modalities and in cases with extreme anatomic variations, to choose a hybrid endovascular approach may be the most feasible and less invasive.

Despite progress in endovascular therapy, large infrarenalble to use combined thoracic and abdomi-nal stent graft as an alternative treatment modality when the patient is not suitable for standard EVAR and open surgery.