Heart sarcoma and invasion of the mitral valve: Case report

Primary cardiac sarcoma is a malignant and rare type of tumor that occurs in the heart. About 25% of primary cardiac tumors are malignant, and 95% of these are sarcomas. The most common cardiac sarcoma is the angiosarcoma (about 37%), while others include undifferentiated sarcoma (24%), malignant fibrous histiocytoma (MFH) (11%–24%), leiomyosarcoma (8%-9%), and osteosarcoma (3%–9%). Less encountered primary tumors of the heart include rhabdomyosarcoma, liposarcoma, fibrosarcoma, synovial sarcoma, and hemangiopericytoma, with the least reported cardiac tumors being the intimal (spindle cell) sarcomas.

The mean age of presentation is around 40 years with no sex predilection. Patients present after variable periods of symptoms which are often non-specific, ranging from few weeks to several months and almost all are symptomatic at presentation. The diagnosis of these tumors is made by imaging techniques and pathological study.

This new case report is an opportunity for us to make a reminder of this little-known entity among cardiologists and heart surgeon.

A large (3, 8 × 2, 4 cm in diameter) echogenic and multi lobular mass in the left atrium with moderate mitral regurgitation. It is observed that the mass has invaded the left atrial wall and mitral valve.

She was referred for surgical assessment after the findings of left atrial mass. The patient was opered under cardiopulmonary bypass. The approach was sternotomy.

The guesture was resected of tumor as completely as possible and mitral valve replacement under CPB.

Macroscopic examination of the cardiac specimen revealed  polypoid  atrial masses weighing 30.4 grams with a side to side dimension of 4.3cm, length of up to 4.5cm, and a thickness of up to 2.9cm from the atrial endocardium. The mass involved the atrial wall posteriorly and the entire posterior mitral leaflet, except for its free margin. The most protuberant part of the mass was considerably softer in consistency and deeper yellow in color with small darker areas. 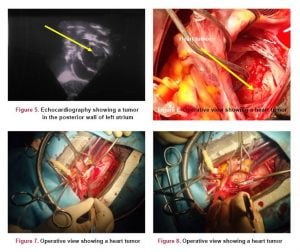 The prognosis of cardiac primary sarcomas is generally poor. These tumors are highly aggressive with the mean survival being 3 months to 1 year. Cardiac tumors can cause significant morbidity and mortality. The effects of a cardiac tumor depend on its anatomical location in the heart, size, invasiveness, friability, and the rate of growth. The most important factor affecting the prognosis of these tumors is the anatomical location in the heart (intracavitary versus intra/extramyocardial growth).

Although aggressive surgery can offer dramatic palliation of symptoms caused by valvular and/or vascular obstruction, local recurrence and metastasis occur frequently and early, usually within 1 year. Chemotherapy and radiation therapy have limited benefit.

Heart surgery is the treatment of choice for sarcoma. Cardiac sarcomas generally lead to death within 2 years of diagnosis, due to rapid infiltration of the myocardium of the heart and obstruction of the normal flow of blood within the heart.