Abdominal aort aneurysm is an asymptomatic and potentially lethal disease which its rupture  is an emergent situation and has a fatality rate of 100% if untreated. Misdiagnosis causes delays for the treatment and it can be catastrophic.  Depending on the patient’s status during admission, the mortality ranges from 20% to 70% even in treated patients.[1,2] In many centers, patients presenting with ruptured abdominal aortic aneurysm (rAAA) are most often treated with open repair(OR). But in centers whom have a hybrid operating room as the surgeons’ comfort and confidence with the technique increases, ruptured endovascular aneurysm repair (rEVAR) has become the preferred treatment option. Furthermore, patients with rAAA who are transferred for a higher level of care have superior clinical outcomes when treated with rEVAR, compared with OR.[3] Herein, we aimed to demonstrate the feasibility of emergent rEVAR in a patient with cardiogenic shock who underwent succesful resuscitations after three times caridac arrest.

A 55-year-old male with acute abdominal pain was transferred to our emergency department and took under evaluation of general surgery and urology clinics with suspicious of renal colic and ileus. At the presentation, serum urea level was 80 mg/dl, creatinin level was 2.97 mg/dl and hemoglobin level was 7.5 g/dl. Computed tomography scan showed a rAAA extending from the caudal of superior mesenteric artery (SMA) to aortic bifurcation with a diameter of  8.53 cm. The aneurysmal sac included the right renal artery, but left renal artery could not be demonstrated (Figure 1). The measurements of the aneurysm is shown in Table 1. The level of the rupture is shown in Figure 2. 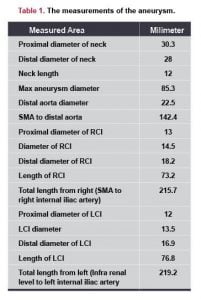 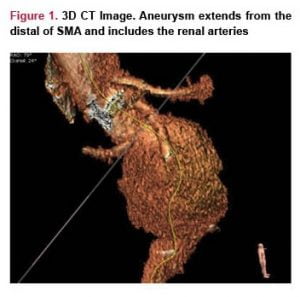 After computed tomographic assessment, a sudden cardiac arrest occured. The patient was entubated and an immediate resuscitation procedure was performed. Systolic blood pressure could be increased to 40 mmHg and caridac arrest repeated for 3 times. After the systolic blood pressure was secured around 50 mmHg, the patient  immediately transferred to catheter laboratory for endovascular repair. Bilateral surgical cutdown to the groin was performed. after positioning a 20 F sheat to left CFA (Sentrant Sheath, Medtronic), a uniiliac stent graft sized 32x14x102 mm was positioned (Endurant® II uniiliac, Medtronic). SMA was preserved. After succesful positioning of the graft, a 16x20x156 mm stent graft (Endurant® II, Medtronic) was used for the extension to the left iliac artery. 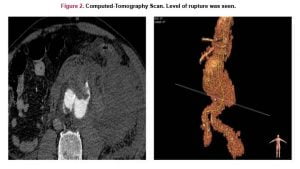 Particular attention was paid to keep the left internal iliac artery open. During the procedure, cannulation of the contralateral limb was unable to be achieved because of the tortuous aortoiliac course. Since the patient was unstable, the Endurant system was combined with Talent® Converter stent-graft occluder (20mm, Medtronic, Inc.; Minneapolis, Minn) positioned to right common iliac artery via a 18.5 F introducer sheath. An aortography was made and a minimal leak from the overlap area was observed. Upon this, Reliant® (Medtronic, Inc.; Minneapolis, Minn) baloon catheter was used to expand the stent graft and reinforce the overlap zone.  After the closure of the rAAA was confirmed.(Figure 3) 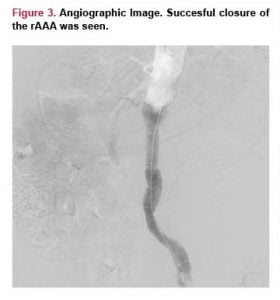 Additional left-to-right femorofemoral bypass with a 8mm Gore-Tex graft was performed. After succesful closure of the rAAA, the patient was taken to the intensive care unit. Postprocedural hemoglobin was 9.8 g/dl, serum creatinin level was 3.63 mg/dl. The patient was extubated 32 h after the procedure without neurologic dysfunction. Renal failure was expected and the patient was consulted to the nephrology clinic for routine dialysis program. The patient was discharged in the postoperative 7th day.

rAAA is a catastrophic condition and the role of rEVAR is still controversial due to the absence of well-supported evidences. Mortality is higher after OR than EVAR according to retrospective studies[4-7] and confirmed by the Swedish Vascular Registry.[8] Furthermore, preoperative shock table and unstable status was found as a major factor predicting mortality rate.[9] Also many publications pointed out that the duration of intensive care is shorter[10,11] and operative blood loss and/or need for transfusion is lowerin rEVAR patients.[12,13] Our patient was followe up for 5 days in ICU and we only gave 2 units of erythrocyte suspension and 2 units of fresh frozen plasma during the operation. Since rEVAR allows the reduction of intraoperative blood loss and the elimination of the aortic clamping and fluid shifts/losses due to a large transperitoneal incision, we did not encountered with a cardiac complication. After overlapping the stent grafts, we observed a type III endoleak from the overlap zone then we fixed it by using a balloon catheter. We also placed an occluder to right common iliac artery to prevent a type II endoleak , as mentioned above. Immediate resuscitation in the emergency department, succesful management of a comatose and unstable patient both in the preoperative and postoperative period protected the patient to have a neurological complication.

Our first goal was to achieve a safe transfer to the intensive care unit and keep patient alive. Due to lack of every size and types of graft in our hospital and inability to perform a contralateral limb cannulation we had to admit renal complications and ischemia risk of contralateral limb. Femorofemoral bypass surgery prevented ischemic complications but renail failure was occured and the patient became dialysis dependent. On the other hand renal artery occlusion is also a well known complication of EVAR and it can occur by several mechanism.[14-16]

In this case report we aimed to demonstrate the feasibility of emergent rEVAR in a patient with cardiogenic shock and help cardiovascular surgeons for the future. In a this kind of emergent status chosing the treatment modality (open surgery whether endovascular repair) is debatable. Our another goal was to enrich the literature about this kind of medical scenarios . Further studies and long-term results of endovascular procedures in patients with ruptured aort aneursym are still needed.